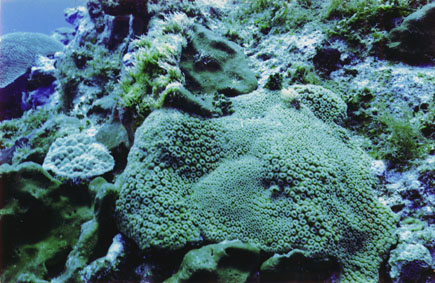 Coral is the calcareous skeleton or fused skeletons of various cnidarians or the skeleton together with the animals (polyps) that secrete it. Corals are simple animals belonging to the class Anthozoa, which also includes the sea anemones. Living and extinct species are classified into six orders; most living species belong to the order Scleractinia.

Corals can be either colonial or solitary, but the majority join together in colonies and secrete external limestone skeletons, forming reefs. Branches and successive layers are formed by budding and by the addition of new members produced sexually which swim freely before attaching themselves and secreting their skeletons. Older members of the colony gradually die, leaving their skeletons behind. Vegetation, such as coraline algae, cements the discarded skeletons, forming coral reefs, of which there are three types: fringing reefs along the shore, barrier reefs offshore, and atolls.

Corals are characterized by their radial symmetry and lack of well-developed organs. The polyp, the soft part of the coral, is essentially a small digestive sack made up of an inner and outer wall, separated by a gelatinous layer. The mouth, surrounded by stinging tentacles, forms an opening through which food enters and waste products are expelled. The hard external skeleton is secreted by the polyp's outer wall.