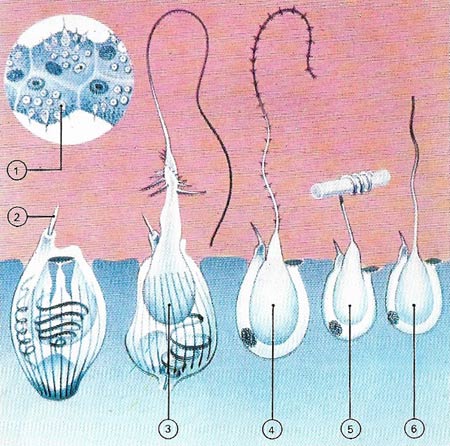 Nematocysts or stinging capsules (1) are the cnidarians' weapons of offence and defence. Located in greatest concentration over the tentacles, they play an essential role in feeding. Some (3) inject a paralysing poison into the prey; some (4,6) secrete a sticky substance; while others (5) have coiling threads. Projecting from one side of each nematocyst is a small hair (2), which acts as a trigger. When the hair is touched by a passing animal the nematocyst fires. The mechanism of firing is not fully understood, but is thought to depend on a sudden pressure increase of the fluid within the capsule. Each nematocyst fires only once, after which it is discarded.

In cnidarians such as jellyfish, a nematocyst is a tiny fluid-filled sac containing a coiled hollow thread that can be shot out at prey.

A nematocyst forms part of a thread cell (nematoblast) in the ectoderm of the animal. When a "trigger" (cnidocil) on the thread cell is touched, the thread is rapidly projected to coil round the prey or inject poison.

The poisonous stings on the tentacles of jellyfish derive from thread cells and their nematocysts.