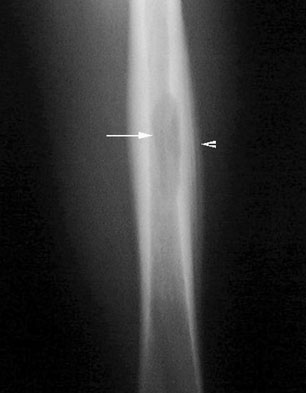 Ewing's sarcoma is a rare malignant bone cancer. Ewing's sarcoma usually arises in a long bone, most commonly the femur (thigh bone), tibia (shin), humerus (upper-arm bone), or one of the pelvic bones, and spreads to other parts of the body at an early stage.

The condition is most common in children between 10 and 15 years of age; it affects twice as many boys as girls and is only rarely seen in black children.

The affected bone is painful and tender and part of it may swell. The bone may also become weakened and fracture easily. Other symptoms include weight loss, fever, and anemia.

The sarcoma is diagnosed by X-rays and a bone biopsy (removal of a small piece of the bone for analysis). If cancer is found, the complete skeleton is examined by X-rays and radionuclide scanning, and the lungs by CT scanning, to determine if, and how far, the cancer has spread. Spreading by the time of diagnosis is found in 15 to 20% of cases.

Treatment is with radiotherapy and anticancer drugs. Before the introduction of chemotherapy, death usually occurred within two to three years of diagnosis. Today, the chances of survival have improved considerably; 65% of those affected are still alive five years after diagnosis and most of them remain well.