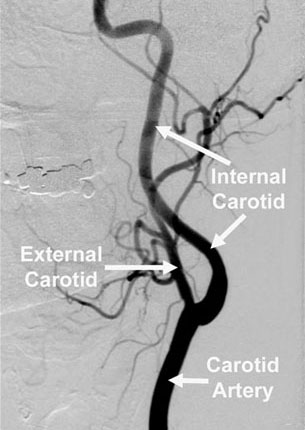 Angiography is an X-ray imaging procedure that enables blood vessels, including major arteries and veins, to be seen clearly. It is most commonly used to investigate coronary artery disease or any disruption of blood supply to the brain. The technique requires the injection of a radiopaque die, or contrast medium (a substance opaque to X-rays), into the bloodstream so that the blood vessels being examined appear in clear silhouette on an X-ray screen.


Why angiography is done

There are various types of angiography.

Carotid angiography is sometimes performed on patients suffering from transient ischemic attack (symptoms of stroke lasting less than 24 hours) to see whether there is a blockage or substantial narrowing in one of the carotid arteries (in the neck), which supply blood to the brain.

Cerebral angiography is used to look for the presence of an aneurysm within the brain or to help pinpoint the position of a brain tumor prior to surgery.


how angiography is done

The radiopaque dye, or contrast medium, is usually injected into the blood vessel to be examined through a fine catheter that is inserted into the femoral artery at the groin, the brachial artery just over the elbow, or a carotid artery.

To insert the catheter, the skin and tissues around the artery are numbed with local anesthetic and then a hollow needle is inserted through the skin into the artery. A long, thin wire with a soft tip is inserted through the needle, the needle is removed, and the catheter is then threaded over the wire into the blood vessel. Under X-ray control, the tip of the catheter is guided further into the vessel to be examined and contrast medium is injected. A rapid sequence of X-ray pictures (or a continuous recording) is taken so that the blood flow through the vessels can be studied.

Angiography can take from as little as a few minutes to as long as two or three hours.

Allergy to the contrast medium is a possible adverse effect, but the use of new contrast agents has reduced the risk of a severe reaction to less than one in 80,000 examinations.

Damage to blood vessels can occur at the site of injection or anywhere along the vessel during the passage of the catheter.