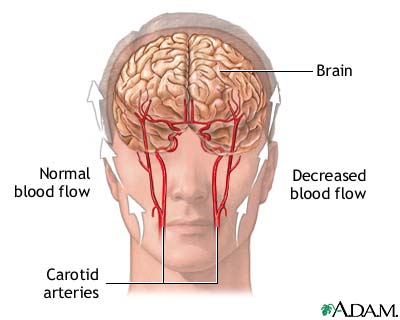 In a TIA, the blood supply is only temporarily blocked. For example, a blood clot may dissolve and allow blood to flow normally again.

A TIA is different than a small stroke. The symptoms of TIAs go away in less than 24 hr, usually less than one hr. TIAs do not show lasting changes on CT or MRI scans. (Small strokes do show changes on such tests.) TIAs are like warnings that a true stroke may happen in the future if something is not done to prevent one.

The loss of blood flow to the brain can be caused by:

Less common causes of TIA include:

In some cases, hypotension (low blood pressure) may be seen before symptoms of a TIA occur. Other risks for TIA include high blood pressure (hypertension), heart disease, migraine headaches, smoking, diabetes, and increasing age.

About a third of those diagnosed with TIA will later have a stroke. TIAs are more common among men and black people.

Symptoms of TIA are the same as those that occur in stroke and include the sudden development of:

Note: Symptoms begin suddenly, last only a short time (from a few minutes to 24 hours), and disappear completely. Symptoms may occur again at a later time. Symptoms usually occur on the same side of the body if more than one body part is involved.

Because symptoms and signs may have completely disappeared by the time one gets to the hospital, A diagnosis of a TIA may be made on a person's medical history alone.

A physical examination should include a neurological exam, which may be abnormal during an episode but normal after the episode has passed.

Blood pressure may be high. The doctor will use a stethoscope to listen to your heart and arteries. An abnormal sound called a bruit may be heard when listening to the carotid artery in the neck or other artery. A bruit is caused by irregular blood flow.

Tests will be done to rule out a stroke or other disorder that may cause the symptoms. Tests to diagnose a TIA may include:

Additional tests and procedures may include:

Your doctor may use these tests to check for hypertension, heart disease, diabetes, high blood lipids, vasculitis, and peripheral vascular disease.

The goal is to improve the arterial blood supply to the brain and prevent the development of a stroke.

Treatment of recent TIA (within the prior 48 hr) usually requires admission to the hospital for evaluation of the specific cause and determination of long-term treatment. Underlying disorders should be treated appropriately, including such disorders as hypertension, heart disease, diabetes, arteritis, and blood disorders.

Smoking should be stopped.

Treatment of symptoms of blood disorders (such as erythrocytosis, thrombocytosis, or polycythemia vera, which include an increase in the number of some types of blood cells) may include phlebotomy, hydration, and treatment of the underlying (causative) blood disorder. Antihypertensive medications may be used to control high blood pressure. Medications to lower cholesterol may be useful in reducing high blood cholesterol levels.

Platelet inhibitors and anti-coagulant medications (blood thinners) may be used to reduce clotting. Aspirin is the most commonly used medication. Others include dipyridamole, clopidogrel, Aggrenox or heparin, Coumadin, or other similar medications. Treatment may be continued for an indefinite time period.

A reduced amount of sodium in the diet to help control high blood pressure; diet for diabetics; reduced dietary fat, or other dietary changes may be recommended.

Surgery (carotid endarterectomy) may be appropriate for some people.

By definition, an episode of TIA is brief and recovery is complete. It may recur later that same day or at a later time. Some people have only a single episode, some have recurrent episodes, and some will have a stroke. A TIA needs to be treated as aggressively as a stroke would, as any given TIA could develop into a stroke.

Prevention of TIA includes controlling the risk factors. Hypertension, diabetes, heart disease, and other associated disorders should be treated as appropriate. Smoking should be stopped. The use of blood thinners may prevent strokes in some patients who have blood clots or atrial fibrillation. Carotid endarterectomy in select patients may prevent stroke.