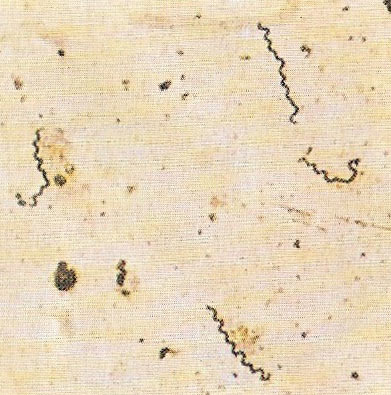 The syphilis bacterium is a spirochaete.

Syphilis is a sexually transmitted, bacterial infection that initially causes genital ulcers (sores); it is caused by the bacterium Treponema pallidum. If untreated, the disease will progress to more serious stages of infection, including blindness and nerve damage.

There also was a dramatic change in which groups the disease affects the most. An increase of primary and secondary syphilis in males has driven the overall rate increase for the US to 54% from 2002 to 2006. Between 2005 and 2006, the number of cases in men increased 11.8%, reflecting an increase in syphilis in men who have sex with men. Additionally, an increase of 11.4% was observed in African-American women from 2005 to 2006.

HIV infection and syphilis are linked. Syphilis increases the risk of transmitting as well as getting infected with HIV.

The most common way to get syphilis is by having sexual contact with an infected person. If you are infected, you can pass the bacteria from infected skin or mucous membranes (linings), usually your genital area, lips, mouth, or anus, to the mucous membranes or skin of your sexual partner.

The bacteria are fragile, so you cannot get syphilis from sharing food or utensils, or from using tubs, pools, or toilets.

Syphilis can be passed from mother to infant during pregnancy, causing a disease called congenital syphilis.

Syphilis is sometimes called "the great imitator" because it has so many possible symptoms, and its symptoms are similar to those of many other diseases. Having HIV infection at the same time can change the symptoms and the course of syphilis. Syphilis (other than congenital syphilis) occurs in four stages that sometimes overlap.

The first symptom of primary syphilis is often a small, round, firm ulcer called a chancre ("shanker") at the place where the bacteria entered your body. This place is usually the penis, vulva, or vagina, but chancres also can develop on the cervix, tongue, lips, or other parts of the body. Usually there is only one chancre, but sometimes there may be many. Nearby lymph nodes are often swollen. The chancre usually appears about 3 weeks after you're infected with the bacteria, but it can occur any time from 9 to 90 days after exposure.

Because a chancre is usually painless and can appear inside your body, you might not notice it. The chancre disappears in about 3 to 6 weeks whether or not you are treated. Therefore, you can have primary syphilis without symptoms or with only brief symptoms that could be overlooked. If primary syphilis is not treated, however, the infection moves to the secondary stage.

Most people with secondary syphilis have a non-itchy skin rash. Although the rash is usually on the palms of your hands and soles of your feet, it may cover your whole body or appear only in a few areas. The rash appears 2 to 10 weeks after the chancre, generally when the chancre is healing or already healed. Other common symptoms include

The latent (hidden) stage of syphilis begins when symptoms of secondary syphilis are over.

In early latent syphilis, you might notice that signs and symptoms disappear, but the infection remains in your body. When you are in this stage, you can still infect a sexual partner.

Even without treatment, only a small number of infected people develop the dreaded complications known as tertiary, or late, syphilis. In this stage, the bacteria will damage your heart, eyes, brain, nervous system, bones, joints, or almost any other part of your body. This damage can happen years or even decades after the primary stage.

Late syphilis can result in mental illness, blindness, deafness, memory loss or other neurological problems, heart disease, and death. Late neurosyphilis (brain or spinal cord damage) is one of the most severe signs of this stage.

It can be very difficult for your health care provider to diagnose syphilis based on symptoms. This is because symptoms and signs of the disease might be absent, go away without treatment, or be confused with those of other diseases. Because syphilis can be hard to diagnose, you should

Your health care provider can diagnose early syphilis by seeing a chancre or rash and then confirming the diagnosis with laboratory tests. Because latent syphilis has no symptoms, it is diagnosed only by laboratory tests. There are two methods for diagnosing syphilis through a laboratory:

If your doctor thinks you might have neurosyphilis, your spinal fluid will be tested as well.

Syphilis is easy to cure in its early stages. Penicillin, an antibiotic, injected into the muscle, is the best treatment for syphilis. If you are allergic to penicillin, your health care provider may give you another antibiotic to take by mouth.

If you have late syphilis, damage done to your body organs cannot be reversed.

While you are being treated, you should abstain from sex until any sores are completely healed. You should also notify your sex partners so they can be tested for syphilis and treated if necessary.

To prevent getting syphilis, you must avoid contact with infected tissue and body fluids of an infected person. However, syphilis is usually transmitted by people who have no visible sores or rashes and who do not know they are infected.

If you are not infected with syphilis and are sexually active, having mutually monogamous sex with an uninfected partner is the best way to prevent syphilis. Using condoms properly and consistently during sexual intercourse reduces the risk of getting syphilis.

Washing or douching after sex will not prevent syphilis. Even if you have been treated for syphilis and cured, you can be re-infected by having sex with an infected partner.

The risk of a mother transmitting syphilis to her unborn baby during pregnancy declines with time but continues during latent syphilis. To prevent passing congenital syphilis to their unborn babies, all pregnant women should be tested for syphilis.

Syphilis can cause miscarriages, premature births, stillbirths, or death of newborn babies. Some infants with congenital syphilis have symptoms at birth, but most develop symptoms later.

Untreated syphilis results in a high-risk pregnancy. There are fewer than 1,000 pregnant women with syphilis in the United States each year. Studies show that for women who get syphilis – but not treatment – during the 4 yr before a pregnancy, the mother's syphilis may lead to infection of the fetus in more than 70% of cases. Untreated early syphilis results in death of the fetus in up to 40% of those pregnancies. Therefore, if you are pregnant, you should be tested for syphilis.

Untreated babies with congenital syphilis can have deformities, delays in development, or seizures, along with many other problems such as rash, fever, swollen liver and spleen, anemia, and jaundice. Sores on infected babies are infectious. Rarely, the symptoms of syphilis may go unseen in infants and they develop the symptoms of late-stage syphilis, including damage to their bones, teeth, eyes, ears, and brains.

Someone who is infected with syphilis is two to five times more likely to acquire HIV infection if they are exposed to the HIV virus. Substantial evidence shows an increased likelihood of getting and transmitting HIV, the virus which causes AIDS, in the presence of other STIs, including syphilis.