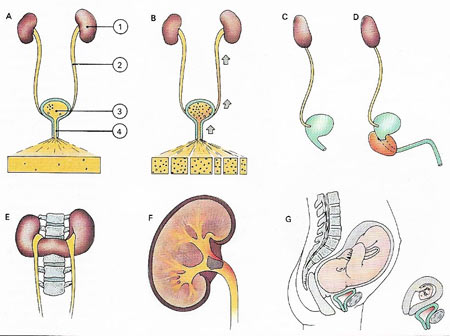 Fig 1. The urinary tract (A) consists of the kidneys (1), ureters (2), bladder (3) and urethra (4). Infection of the tract (B) first affects the urethra and bladder giving symptoms of cystitis with painful and frequent urination. If the infection spreads to the kidneys, it causes inflammation and back pain. A number of factors may lead to infection. The short urethra in the female (C) provides easy access for bacteria, while enlargement of the prostate in the male (D) may prevent the bladder emptying completely. Inherited abnormalities of the kidneys such as "horseshoe" kidney (E) and disorders such as kidney stones (F) predispose to urinary infection. More frequent urination during pregnancy (G), especially in the first two to three months and in the last month, is partly due to distortion of and pressure on the bladder; it encourages infection. 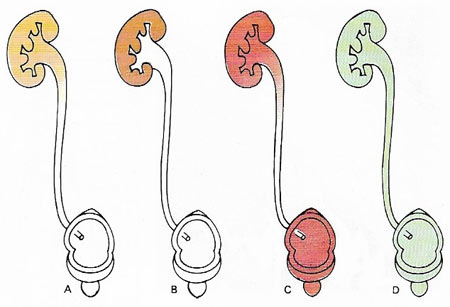 Fig 2. Indications of diseases or infections of the urinary tract can often be found by routine examination of urine. Abnormal contents such as blood, pus and proteins can give some information on the type of disease and the part of the urinary system that is affected. Kidney diseases such as glomerulonephritis (A) are indicated by protein in the urine. In serious stages (B) the protein coagulates into tiny cylindrical urinary casts. Damage to the kidney and bladder (C) is indicated by blood in the urine, and infection of the whole system (D) is indicated by the presence of bacteria in the urine. 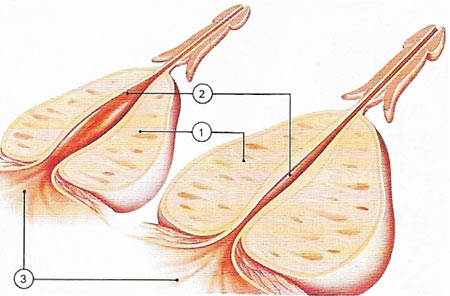 Fig 3. The prostate gland (1) is a partly glandular, firm structure that circles the male urethra (2) at the base of the bladder (3). It produces some of the seminal fluid in which sperm are ejaculated. With increasing years, the gland enlarges, normally a harmless process. However, it may constrict the urethra and prevent adequate urination. Urine becomes increasingly slow and difficult to pass, with dribble at the end of the stream, infection can occur, the kidneys may be damaged, and complete and painful stoppage of the flow may result. Treatment is usually required when this happens and also if urination is too frequent. This involves surgical removal of at least part of the gland. 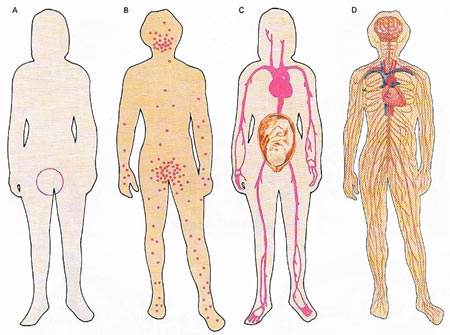 Fig 4. Syphilis is an infectious disease transmitted during sexual intercourse. Generally a sore or chancre appears painlessly at the site of the infection (A), usually on the genitalia, within ten weeks. The next phase occurs with a spread of bacteria by means of the blood, causing mild illness with skin and mucous membrane rash (B). There may be no symptoms after this but a fetus in the uterus may be infected and born with congenital syphilis (C). The disease may be dormant for up to 40 years but late effects can extensively damage heart and blood vessels, nerves and brain (D). The bacterium is a spirochaete. 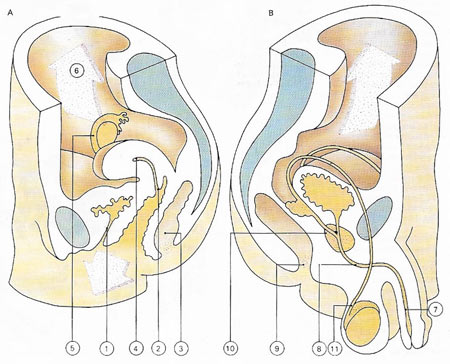 Fig 5. Gonorrhea, a bacterial disease usually transmitted by sexual intercourse, causes inflammation of the urinary and reproductive organs in females (A) it causes mild inflammation of the urethra (1), cervix (2) and sometimes the rectum (3). The bacteria may spread to the uterus (4) and the Fallopian tubes and ovaries (5), causing infertility. Symptoms elsewhere may follow, spread by the bloodstream (6). In the male (B) similar effects occur but are usually more acute, with pus discharged from the urethra (7) which may narrow higher up (8). The rectum (9), prostate (10) and epididymis (11) may be infected through the blood. Early treatment of this is essential.

While the urinary and genital systems (Fig 1) serve very different functions, they are often considered together for they share anatomical parts. The openings of these systems, the exits for urine, the penis in men and the vagina in women, are potential points where infections from outside may enter. Symptoms may include difficult urination as in cystitis (inflammation of the bladder), blood in the urine, back pain, and disturbances such as fever, sweating, and general sickness (Fig 2).

Urinary infections are much more common in females, perhaps because the shorter urethra (the tube from the bladder to the outside) provides an easier path for invading bacteria than in the male. Of the 300 ml (0.6 pint) or so of urine in the full bladder all but 1–2 ml are normally passed. If bladder emptying is only partial, as may occur in the male with an enlarged prostate (Fig 3), any bacteria that reach the bladder are more likely to cause infection as they are not adequately washed away. Congenital anatomical abnormalities present in the urinary tract, or the development of stones in the kidney, favor bacterial infections.

Kidney stones are formed from an accumulation of mineral substances filtered by the kidneys during the formation of urine. Stones may cause intense pain (ureteral colic) if they block or move down the ureter. If the kidney tubules, which are part of the kidney's two million or so filtering units, or nephrons, are defective – either congenitally or as a consequence of pyelonephritis (severe kidney infection) – crystals of calcium salts may be deposited. Stones may form also in patients with gout.

The urogenital system can pick up infections during sexual intercourse. These venereal disorders are of various types. They can produce both local symptoms at the time of infection and also permanent problems such as sterility. Other effects of syphilis may become apparent only after a period of years when widespread circulatory and nervous system diseases occur (Fig 4). However, the advent of antibiotics allows these diseases to be cured when they are promptly treated by specialists. Less serious but much more widespread are vaginal infections causing irritation and discharge. These may be caused by fungi, especially Candida albicans (thrush) or microscopic amoeba-like organisms of the genus Trichomonas.

Sterility may be caused by venereal diseases and by other disorders of the urogenital system. These disorders include the retention of one or both testicles inside the male body (the testicles normally descend to the exterior before birth) and malformation, damage or disease of the testes or ovaries that impairs the production of sperm and eggs.

Kidneys may fail to function adequately either suddenly or slowly, and for many reasons. Less than 25% of kidney tissue is necessary for normal removal of waste matter from the blood, and life is possible with even less than this. If kidneys fail completely, it is now possible to use a machine to do their job of removing waste material. Alternatively, a diseased kidney can be replaced by a transplanted kidney is carefully matched (like the matching of blood before transfusion), but drug treatment is necessary to help prevent the body's rejection of the graft.

Sudden kidney failure may occur of the blood pressure and flow through the kidneys drop too low – as after hemorrhage or severe burns. It is also a feature of acute glomerular disease where extensive swelling and inflammation is found in the glomeruli, which are parts of the filtering units. This can follow bacterial infection of, say, the throat or streptococci.

Many disorders can result from chronic renal (kidney) disease in which the ability of the kidney to remove the waste materials from the blood gradually deteriorates. The breakdown products of proteins are dealt with particularly badly by the failing kidney, and limitation of protein foods may be an essential part of the medical treatment.

Like other parts of the body the urogenital system is at risk from tumour formation, in children, several rare types of kidney cancer are usually malignant, while in later life bladder tumors may be benign or malignant. They may be single or multiple polyps (wart-like growths) and can cause blood to appear in the urine. Often polyps can be removed or burned through a cystoscope – a tube inserted through the urethra by which the bladder can be inspected and treated. The genitalia and reproductive organs may also show tumor growth. Tumors of the testes are rare, but the female reproductive organs are common sites for both benign tumors, often called fibroids, and malignant ones known as cancers. It has been found that cancer of the body of the uterus (womb) is more likely in women who have no children. Similarly breast cancer is a little more common in those women who have no children, or in whom the first child was born when the mother was older than 30.

In contrast, cancer of the cervix, or neck of the womb, seems to occur in women with several children, and its incidence is influenced by factors in the male. Circumcision of the penis, or careful hygiene in the uncircumcised, appears to reduce the risk.