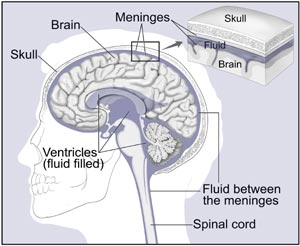 The brain and nearby structures. 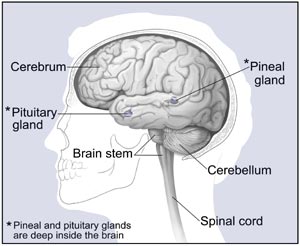 Major parts of the brain. 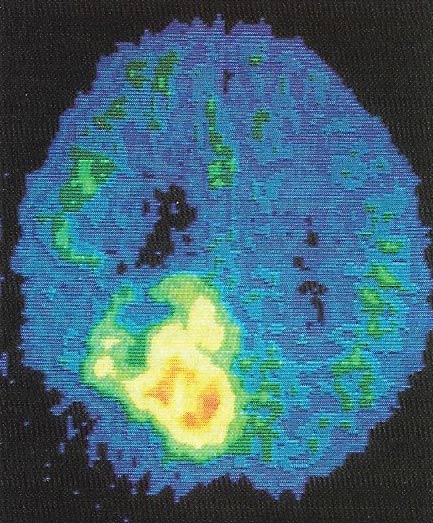 PET scan of a brain shows the presence, extent, and location of a tumor. The irregular bright area on the scan is a result of faster glocose metabolism in that part of the brain.

A brain tumor is a tumor that begins in the brain is called a primary brain tumor. In children, most brain tumors are primary tumors. In adults, most tumors in the brain have spread there from the lung, breast, or other parts of the body. When this happens, the disease is not brain cancer. The tumor in the brain is a secondary tumor. It is named for the organ or the tissue in which it began.

Treatment for secondary brain tumors depends on where the cancer started and the extent of the disease.

The brain is a soft, spongy mass of tissue. It is protected by the bones of the skull and three thin membranes called meninges. Watery fluid called cerebrospinal fluid cushions the brain. This fluid flows through spaces between the meninges and through spaces within the brain called ventricles.

The brain directs the things we choose to do (like walking and talking) and the things our body does without thinking (like breathing). The brain is also in charge of our senses (sight, hearing, touch, taste, and smell), memory, emotions, and personality.

The three major parts of the brain control different activities:

Brain tumors can be benign or malignant:

Doctors sometimes group brain tumors by grade – from low grade (grade I) to high grade (grade IV). The grade of a tumor refers to the way the cells look under a microscope. Cells from high-grade tumors look more abnormal and generally grow faster than cells from low-grade tumors.

The most common primary brain tumors are gliomas. They begin in glial cells. There are many types of gliomas:


Some types of brain tumors do not begin in glial cells. The most common of these are:

When cancer spreads from its original place to another part of the body, the new tumor has the same kind of abnormal cells and the same name as the primary tumor. Cancer that spreads to the brain from another part of the body is different from a primary brain tumor. When cancer cells spread to the brain from another organ (such as the lung or breast), doctors may call the tumor in the brain a secondary tumor or metastatic tumor. Secondary tumors in the brain are far more common than primary brain tumors.


Who is at risk from brain tumors?

No one knows the exact causes of brain tumors. Doctors can seldom explain why one person develops a brain tumor and another does not. However, it is clear that brain tumors are not contagious. No one can "catch" the disease from another person.

Research has shown that people with certain risk factors are more likely than others to develop a brain tumor. A risk factor is anything that increases a person's chance of developing a disease.

The following risk factors are associated with an increased chance of developing a primary brain tumor:

Scientists are investigating whether cell phones may cause brain tumors. Studies thus far have not found an increased risk of brain tumors among people who use cell phones.

Scientists also continue to study whether head injuries are a risk factor for brain tumors. So far, these studies have not found an increased risk among people who have had head injuries.

Most people who have known risk factors do not get brain cancer. On the other hand, many who do get the disease have none of these risk factors. People who think they may be at risk should discuss this concern with their doctor. The doctor may be able to suggest ways to reduce the risk and can plan an appropriate schedule for checkups.

These are the most common symptoms of brain tumors:

These symptoms are not sure signs of a brain tumor. Other conditions also could cause these problems. Anyone with these symptoms should see a doctor as soon as possible. Only a doctor can diagnose and treat the problem.

If a person has symptoms that suggest a brain tumor, the doctor may perform one or more of the following procedures:


The doctor may ask for other tests:

Surgeons can obtain tissue to look for tumor cells in three ways:

Sometimes a biopsy is not possible. If the tumor is in the brain stem or certain other areas, the surgeon may not be able to remove tissue from the tumor without damaging normal brain tissue. The doctor uses MRI, CT, or other imaging tests instead.

A person who needs a biopsy may want to ask the doctor the following questions:

Read about how a brain tumor is treated.