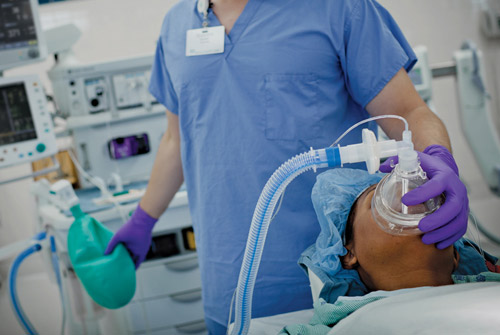 Anesthesia is an absence of sensation, which may be of three types: general, local, or pathological. General anesthesia is a reversible state of drug-induced suppression of reflexes, which facilitates many surgical procedures and avoids distress. An anesthesiologist attends to ensure stable anesthesia and to protect vital functions. While ethanol and narcotics have been used for their anesthetic properties for centuries, modern anesthesia dates from the use of diethyl ether by William Morton in 1846, and of chloroform by James Simpson in 1847 (see history of surgery).

The use of anesthetics dates back to around 1500 BC, when opium poppies were harvested in the Middle East and eastern Mediterranean. The Islamic Empire has many accounts of both oral and inhalant anesthetics being used during surgical operations – mostly sponges soaked in various narcotic preparations and placed over the patient's nose and mouth. In 1800 the use of nitrous oxide was first recorded by British chemist Humphrey Davy (1778–1829), who observed that he had felt dizzy and even euphoric after inhaling it. It would be another forty years before it found broad clinical acceptance as an anaesthetic, but the days when pain was considered an unavoidable ingredient to life, of God's punishment to women in labour, or a way of purifying a wicked heart, were numbered.

Nitrous oxide may have been discovered by the British scientist Joseph Priestly in 1772, but it was Davy who first suggested it might be used to relieve the pain and shock of surgery if inhaled. In his now famous paper, "Researches, Chemical and Philosophical, Chiefly Concerning Nitrous Oxide, or Dephlogisticated Nitrous Air and its Respiration" (1800), Davy wrote: "As nitrous oxide in its extensive operation appears capable of destroying physical pain, it may probably be used with advantage during surgical operations…" Davy may have become distracted in the years that followed by other work, including the development of the voltaic battery and the invention of a safety lamp for miners (the Davy lamp), but his search for an anaesthetic for everyday surgical use was a watershed in the development of modern medicine.

Nowadays injection of short-acting barbiturates, such as sodium pentothal, is frequently used to induce anesthesia rapidly; inhaled agents, including halothane, ether, nitrous oxide, trichloroethylene, and cyclopropane, are used for induction and maintenance. Local and regional anesthesia are the reversible blocking of pain impulses by chemical action of cocaine derivatives (e.g., procaine, lignocaine). Nerve trunks are blocked for minor surgery and dentistry, and more widespread anesthesia may be achieved by blocking spinal nerve roots, useful in obstetrics and patients unfit for general anesthesia. Pathological anesthesia describes loss of sensation following trauma or disease.

Epidural anesthesia involves the injection of a local anesthetic into the epidural space surrounding the spinal cord. It is done to anesthetize the spinal nerve roots and so prevent pain during surgery or childbirth.