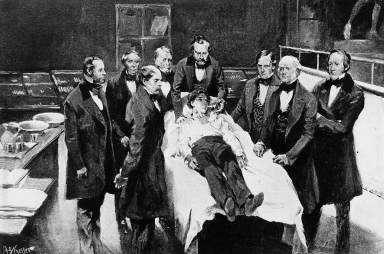 William Morton demonstrating the use of ether (1846).

William Morton was an American dentist who pioneered the use of diethyl ether as a dental and surgical anesthetic. Morton studied at Baltimore College of Dental Surgery, the world's first dental school, but left without finishing his degree. In 1844 he became a student at Harvard Medical School, but again failed to complete his studies. However, while at Harvard he attended the lectures of Charles Jackson, who in 1844 demonstrated that inhaling ether caused unconsciousness.

Having seen his former business partner Horace Wells fail to convince the medical establishment of the usefulness of nitrous oxide as an anesthetic, Morton decided to investigate ether. In 1846 he painlessly extracted a tooth from a local Boston merchant after administering ether. The success led others to start experimenting with ether, and its use spread rapidly around the world. In 1852 Morton was granted an honorary doctorate by the Washington University in Baltimore.

Morton spent much of the rest of his life, without little success, in disputes with other medical men, most notably C. W. Long, over who first demonstrated the effective anesthetic properties of ether. He died aged 48, deeply in debt because of his legal battles.