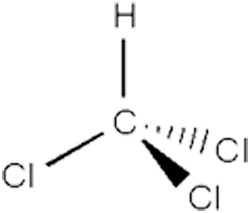 Chloroform. also known as trichloromethane (CHCl3), is a dense, colorless, nonflammable, volatile liquid made by chlorination of ethanol or acetone. It was the first inhalation anesthetic to be discovered, but is a dangerous drug which can cause hypotension, myocardial and respiratory depression, cardiogenic shock, ventricular fibrillation, coma, and death if improper dosage is used. Delayed poisoning, even weeks after apparently complete recovery, can occur and serious vision or eye damage is frequently reported. Chloroform is a member of the haloalkane family of organic compounds. Molecular weight 119.4, melting point -64°C, boiling point 61°C.

Chloroform was discovered as a chemical curiosity about the same time (1831) by Guthrie in the United States, Liebig in Germany, and Soubeiran in France. Soon, however, its properties as a stimulant when taken internally attracted attention, and when in 1847 it was brought into prominent notice as an anesthetic by Sir James Simpson, it was immediately recognized as one of the most valuable contributions of chemical science to the relief of pain in surgery.