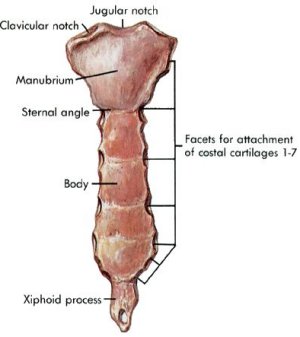 The sternum, also called the breastbone, is a narrow, flat bone that extends from the base of the neck to just below the diaphragm in the center of the chest; it is 15–20 centimeters long. The sternum consists of three sections: a triangular upper part called the manubrium; a long narrow middle part called the body or gladiolus; and a lower, more flexible cartilaginous part, shaped like a leaf, called the xiphoid process. The sternum together with the costal cartilages attached it is called the plastron.

The manubrium articulates with, and is attached by ligaments to, the inner ends of the two clavicles (collarbones). The sides of the manubrium and body are joined to the ribs by seven pairs of costal cartilages. The manubrium lies opposite the third and fourth thoracic vertebrae.


Body of the sternum

The xiphoid process is the lowest and smallest part of the sternum. It is a thin plate of hyaline cartilage that becomes ossified at its proximal end in adult life.

The sternal angle, also called the angle of Louis, formed by the articulation of the manubrium with the body of the sternum, can be recognized by the presence of a transverse ridge on the anterior aspect of the sternum. The transverse ridge lies at the level of the second costal cartilage, the point from which all costal cartilages and ribs are counted. The sternal angle lies opposite the intervertebral disk between the fourth and fifth thoracic vertebrae.

The xiphisternal joint lies opposite the body of the ninth thoracic vertebra.

The sternum is very strong and requires great force to fracture it. The main danger of such an injury is not the fracture itself, but the possibility that the broken bone may be driven inwards and damage the heart (which lies behind the sternum).

Sternotomy is the surgical division of the sternum, performed to allow access to the heart and its major vessels.