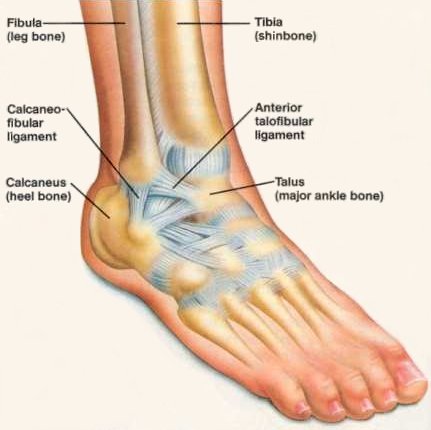 The ankle joint is the hinge joint between the foot and the leg. The uppermost bone of the foot, called the talus (ankle-bone), fits between the two bony protuberances formed by the lower ends of the tibia (shin bone) and fibula.


Ligaments of the ankle

The lateral ligament is weaker than the medial ligament and consists of three distinct bands.


Movements of the ankle

Dorsiflexion is performed by the tibialis anterior, extensor hallucis longus, extensor digitorum longus, and peroneus tertius. It is limited by the tension of the tendo calcaneus, the posterior fibers of the medial ligament, and the calcaneofibular ligament.

Plantar flexion is performed by the gastrocnemius, soleus, plantaris, peroneus longus, peroneus brevis, tibialis posterior, flexor digitorum longus, and flexor hallucis longus. It is limited by the tension of the opposing muscles, the anterior fibers of the medial ligament, and the anterior talofibular ligament.

Note that during dorsiflexion of the ankle joint, the wider anterior part of the articular surface of the talus is forced between the medial and lateral malleoli, causing them to separate slightly and tighten the ligaments of the inferior tibiofibular joint. This arrangement greatly increases the stability of the ankle joint when the foot is in the initial position for major thrusting movements in walking, running, and jumping.

Note also that when the ankle joint is fully plantar flexed, the ligaments of the inferior tibiofibular joint are less taut and small amounts of rotation, abduction, and adduction are possible.


Sprains and fracture dislocations of the ankle

Fracture dislocations of the ankle joint are common. Forced external rotation and over-eversion of the foot is the most common cause of fracture dislocation. The talus is externally rotated forcibly against the lateral malleolus of the fibula. The torsion effect on the lateral malleolus causes it to fracture spirally. If the force continues, the talus moves laterally, and the medial ligament of the ankle joint becomes taut and pulls off the tip of the medial malleolus. If the talus is forced to move still farther, its rotary movement results in its violent contact with the posterior inferior margin of the tibia, which shears off.