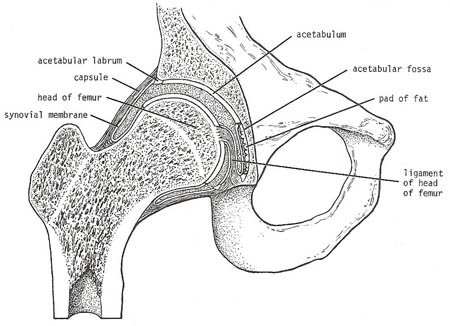 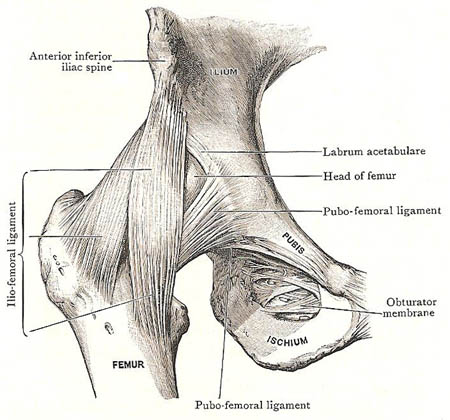 Ligaments of hip joint from the front. 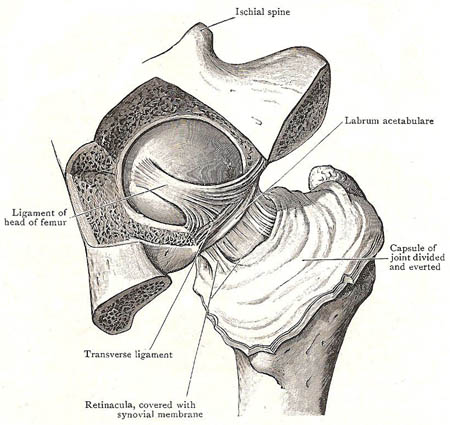 Hip joint from behind. The bottom of the acetabulum has been removed to show the ligament of head of femur.

The hip joint is a ball-and-socket joint between the upper end of the femur (thigh bone) and the pelvis. The rounded head of the femur fits into a deep hollow in the pelvis called the acetabulum. Both surfaces are covered by articular cartilage.

Tough ligaments attach the femur to the pelvis (see below), further stabilizing the joint and giving in the necessary strength to support the weight of the upper body and to take the strain of running, jumping, and other vigorous leg movements.

The ball-and-socket nature of the joint also allows the leg a considerable range of movement. It does not allow so free a range as that which takes place at the shoulder joint, but what it loses in this respect it gains in strength and stability. Its great strength and security depend upon: (1) the depth of the acetabulum and the fact that its mouth is reduced in width by a circular band called the labrum acetabulum, which is attached to its lips; (2) the tension and strength of the ligaments; (3) the length and oblique direction of the neck of the femur; (4) the strength of the surrounding muscles; and (5) atmospheric pressure.


Ligaments of the hip joint

In addition to the capsular ligament, thickened portions of which have special names – the iliofemoral, pubofemoral, and ischiofemoral ligaments – there are three other ligamentous structures associated with this joint.

The capsular ligament is exceedingly strong and surrounds the joint on all sides. Proximally, it is attached around the acetabulum. Distally, it clasps the neck of the femur; the anterior part of this attachment is to the whole length of the trochanteric line and to the root of the great trochanter, and it is very firm and strong; posteriorly, it falls short of the trochanteric crest by about half an inch, and its attachment to the neck of the femur is weak.

The capsule of the hip joint is composed of fibers that run in two different directions. The majority pass obliquely from the hip-bone to the femur. There are, however, other fibers which lie more or less at right angles to the oblique fibers and constitute the zona orbicularis. Three thickened portions of the capsule deserve special description, as follows.

The iliofemoral ligament is placed over the front of the joint, and is the thickest and most powerful part of the capsule. Proximally, it is attached to the anterior inferior iliac spine and to the depressed surface immediately lateral to that spine. Distally, it widens to be attached to the trochanteric line of the femur. It is thicker at the sides than in the middle, and these thickenings give the ligament the appearance of an inverted Y.

The iliofemoral ligament is a quarter of an inch thick and is one of the strongest ligaments in the body – its only rival being the interosseous sacroiliac ligament. A strain varying from 250 lb. to 750 lb. is needed to rupture it. It is rarely torn in dislocation of the hip joint.

The pubofemoral ligament is the name applied to fasciculi which spring from the pubis bone and the obturator membrane, and join the lower and anterior part of the capsule. When the bursa of the iliopsoas is continuous with the cavity of the joint, the aperture of communication is placed between this band and the iliofemoral ligament.

The ischiofemoral ligament is a comparatively weak band which springs from the ischium below the acetabulum, and passes upward and laterally to blend with the posterior part of the capsule.

This is a strong band of fibers that bridges across the acetabular notch, and is attached to the margin of the notch. It completes the rim of the acetabulum, and converts the notch into a foramen through which vessels and nerves enter the joint.

The acetabular lip is a firm fibrocartilaginous ring which is fixed to the rim of the acetabulum; it deepens the cavity of the acetabulum, and at the same time narrows its mouth to a slight extent. The labrum fits closely upon the head of the femur, and, acting like a sucker, exercises an important influence in retaining it in place. Both surfaces of the labrum are covered with synovial membrane; its free margin is thin, but it much thicker at its attachment to the acetabular rim.


Ligament of head of femur

This band has long been called the "ligamentum teres" (teres = round), but is flat and fan-shaped. Its narrow end is implanted into the pit on the head of the femur; its flattened end is bifid, and is fixed to the margins of the acetabular notch, and also to the transverse ligament. This attachment can be defined by the removal of the synovial membrane and some areolar tissue. The ligament is surrounded by a prolongation of the synovial membrane; and a small artery runs along it to the head of the femur.


Synovial membrane and interior of the joint

A mass of soft fat occupies the fossa of the acetabulum. Upon this the ligament of the head of the femur is placed; and articular twigs from the obturator vessels and nerve enter it by passing through the acetabular notch.

At the acetabular attachment of the capsule, the synovial membrane is reflected on to the labrum acetabulare and invests both its surfaces. It covers also the articular surface of the transverse ligament and the cushion of fat which occupies the acetabular fossa. Lastly, it gives a tubular investment to the ligament of the head of the femur.

Trendelenburg's test is a test that is used to assess the function of each hip in turn. It involves standing on each leg in turn and then lifting the other leg while keeping the spin straight. Normally, as the leg is raised, the pelvis on the same side should lift. Drooping of the pelvis on the side of the raised leg indicates that there may be an inherent problem, such as a hip dislocation or weakness of the buttock muscles.