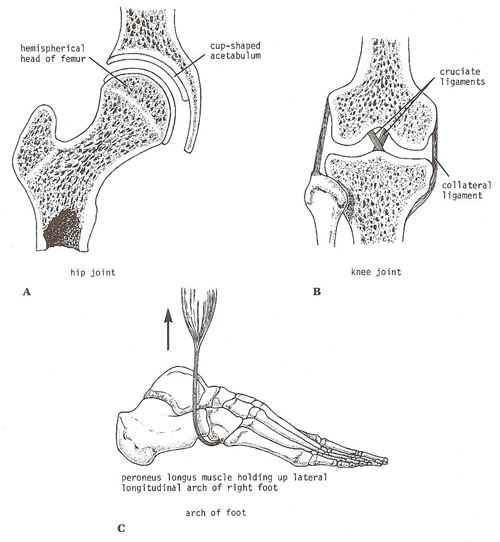 The three main factors responsible for stabilizing a joint: (A) shape of articular surfaces, (B) ligaments, and (C) muscle tone.

The stability of a joint depends on three main factors:

We'll now consider each of these factors in turn.

The ball-and-socket arrangement of the hip joint and the mortise arrangement of the ankle joint are good examples of how bone shape plays an important role in joint stability. There are other examples of joints, however, in which the shape of the bones contributes little or nothing to the stability; for example, the acromioclavicular joint, the calcaneocuboid joint, and the knee joint.

In most joints, muscle tone is the major factor controlling stability. For example, the muscle tone of the short muscles around the shoulder joint keeps the hemispherical head of the humerus in the shallow glenoid cavity. Without the action of these muscles, very little force would be required to dislocate this joint. The knee joint is very unstable without the tonic activity of the quadriceps femoris muscle. The joints between the small bones forming the arches of the feet are largely supported by the tone of the muscles of the leg, whose tendons are inserted into the bones of the feet.