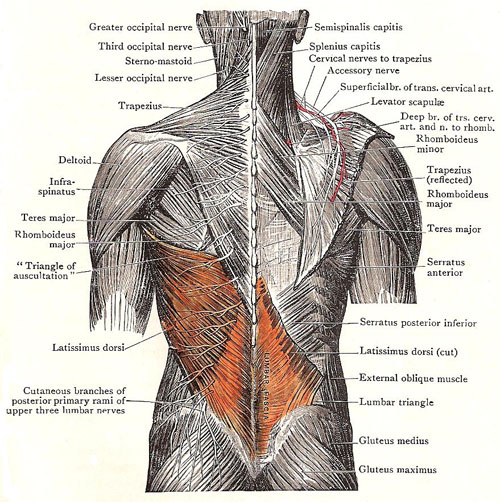 Superficial muscles of the back, including latissimus dorsi (orange).

The latissimus dorsi is a large, flat, triangular muscle which covers the back from the level of the sixth thoracic vertebra down to the iliac crest. The greater part of it is subcutaneous (beneath the skin); but its upper part, near the spines, is overlapped by the trapezius. The fibers of the latissimus dorsi arise from: (1) the tips of the lower six thoracic spines and the corresponding supraspinous ligaments; (2) the lumbar fascia; (3) the outer lip of the iliac crest, in front of the lumbar fascia; (4) from the lower three or four ribs; and (5) by a fleshy slip from the back of the inferior angle of the scapula.

Its fibers converge rapidly toward the lower part of the scapula; and it sweeps over the inferior angle in the form of a thick, fleshy band which winds round the lower margin of the teres major and terminates in a thin, narrow tendon, which is inserted chiefly into the floor of the bicipital groove of the humerus.

The latissimus dorsi is supplied by a special nerve (C. 6, 7, 8) from the posterior cord of the brachial plexus. It is an adductor, retractor, and medial rotator of the upper limb.