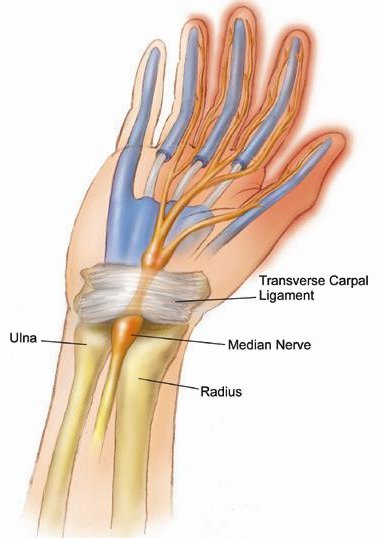 Compression of the median nerve in the wrist leads can lead to carpal tunnel syndrome.

Carpal tunnel syndrome is a painful progressive condition caused by compression of a key nerve in the wrist. Carpal tunnel syndrome occurs when the median nerve, which runs from the forearm into the hand, becomes pressed or squeezed at the wrist. The median nerve controls sensations to the palm side of the thumb and fingers (although not the little finger), as well as impulses to some small muscles in the hand that allow the fingers and thumb to move. The carpal tunnel – a narrow, rigid passageway of ligament and bones at the base of the hand – houses the median nerve and tendons. Sometimes, thickening from irritated tendons or other swelling narrows the tunnel and causes the median nerve to be compressed. The result may be pain, weakness, or numbness in the hand and wrist, radiating up the arm. Although painful sensations may indicate other conditions, carpal tunnel syndrome is the most common and widely known of the entrapment neuropathies in which the body's peripheral nerves are compressed or traumatized.

Symptoms usually start gradually, with frequent burning, tingling, or itching numbness in the palm of the hand and the fingers, especially the thumb and the index and middle fingers. Some carpal tunnel sufferers say their fingers feel useless and swollen, even though little or no swelling is apparent. The symptoms often first appear in one or both hands during the night, since many people sleep with flexed wrists. A person with carpal tunnel syndrome may wake up feeling the need to "shake out" the hand or wrist. As symptoms worsen, people might feel tingling during the day. Decreased grip strength may make it difficult to form a fist, grasp small objects, or perform other manual tasks. In chronic and/or untreated cases, the muscles at the base of the thumb may waste away. Some people are unable to tell between hot and cold by touch.

Carpal tunnel syndrome is often the result of a combination of factors that increase pressure on the median nerve and tendons in the carpal tunnel, rather than a problem with the nerve itself. Most likely the disorder is due to a congenital predisposition – the carpal tunnel is simply smaller in some people than in others. Other contributing factors include trauma or injury to the wrist that cause swelling, such as sprain or fracture; overactivity of the pituitary gland; hypothyroidism; rheumatoid arthritis; mechanical problems in the wrist joint; work stress; repeated use of vibrating hand tools; fluid retention during pregnancy or menopause; or the development of a cyst or tumor in the canal. In some cases no cause can be identified.

There is little clinical data to prove whether repetitive and forceful movements of the hand and wrist during work or leisure activities can cause carpal tunnel syndrome. Repeated motions performed in the course of normal work or other daily activities can result in repetitive motion disorders such as bursitis and tendinitis. Writer's cramp – a condition in which a lack of fine motor skill coordination and ache and pressure in the fingers, wrist, or forearm is brought on by repetitive activity – is not a symptom of carpal tunnel syndrome.

Women are three times more likely than men to develop carpal tunnel syndrome, perhaps because the carpal tunnel itself may be smaller in women than in men. The dominant hand is usually affected first and produces the most severe pain. Persons with diabetes or other metabolic disorders that directly affect the body's nerves and make them more susceptible to compression are also at high risk. Carpal tunnel syndrome usually occurs only in adults.

Early diagnosis and treatment are important to avoid permanent damage to the median nerve. A physical examination of the hands, arms, shoulders, and neck can help determine if the patient's complaints are related to daily activities or to an underlying disorder, and can rule out other painful conditions that mimic carpal tunnel syndrome. The wrist is examined for tenderness, swelling, warmth, and discoloration. Each finger should be tested for sensation, and the muscles at the base of the hand should be examined for strength and signs of atrophy. Routine laboratory tests and X-rays can reveal diabetes, arthritis, and fractures.

Physicians can use specific tests to try to produce the symptoms of carpal tunnel syndrome. In the Tinel test, the doctor taps on or presses on the median nerve in the patient's wrist. The test is positive when tingling in the fingers or a resultant shock-like sensation occurs. The Phalen, or wrist-flexion, test involves having the patient hold his or her forearms upright by pointing the fingers down and pressing the backs of the hands together. The presence of carpal tunnel syndrome is suggested if one or more symptoms, such as tingling or increasing numbness, is felt in the fingers within 1 minute. Doctors may also ask patients to try to make a movement that brings on symptoms.

Often it is necessary to confirm the diagnosis by use of electrodiagnostic tests. In a nerve conduction study, electrodes are placed on the hand and wrist. Small electric shocks are applied and the speed with which nerves transmit impulses is measured. In electromyography, a fine needle is inserted into a muscle; electrical activity viewed on a screen can determine the severity of damage to the median nerve. Ultrasound imaging can show impaired movement of the median nerve. Magnetic resonance imaging (MRI) can show the anatomy of the wrist but to date has not been especially useful in diagnosing carpal tunnel syndrome.

Treatments for carpal tunnel syndrome should begin as early as possible, under a doctor's direction. Underlying causes such as diabetes or arthritis should be treated first. Initial treatment generally involves resting the affected hand and wrist for at least 2 weeks, avoiding activities that may worsen symptoms, and immobilizing the wrist in a splint to avoid further damage from twisting or bending. If there is inflammation, applying cool packs can help reduce swelling.

Drugs. In special circumstances, various drugs can ease the pain and swelling associated with carpal tunnel syndrome. Non-steroidal anti-inflammatory drugs, such as aspirin, ibuprofen, and other nonprescription pain relievers, may ease symptoms that have been present for a short time or have been caused by strenuous activity. Orally administered diuretics ("water pills") can decrease swelling. Corticosteroids (such as prednisone) or the drug lidocaine can be injected directly into the wrist or taken by mouth (in the case of prednisone) to relieve pressure on the median nerve and provide immediate, temporary relief to persons with mild or intermittent symptoms. (Caution: persons with diabetes and those who may be predisposed to diabetes should note that prolonged use of corticosteroids can make it difficult to regulate insulin levels. Corticosteroids should not be taken without a doctor's prescription.) Additionally, some studies show that vitamin B6 (pyridoxine) supplements may ease the symptoms of carpal tunnel syndrome.
Exercise

Alternative therapies. Acupuncture and chiropractic care have benefited some patients but their effectiveness remains unproved. An exception is yoga, which has been shown to reduce pain and improve grip strength among patients with carpal tunnel syndrome.

Carpal tunnel release is one of the most common surgical procedures in the United States. Generally recommended if symptoms last for 6 months, surgery involves severing the band of tissue around the wrist to reduce pressure on the median nerve. Surgery is done under local anesthesia and does not require an overnight hospital stay. Many patients require surgery on both hands. The following are types of carpal tunnel release surgery:

Open release surgery, the traditional procedure used to correct carpal tunnel syndrome, consists of making an incision up to 2 inches in the wrist and then cutting the carpal ligament to enlarge the carpal tunnel. The procedure is generally done under local anesthesia on an outpatient basis, unless there are unusual medical considerations.

Endoscopic surgery may allow faster functional recovery and less postoperative discomfort than traditional open release surgery. The surgeon makes two incisions (about ½" each) in the wrist and palm, inserts a camera attached to a tube (see endoscopes and endoscopy), observes the tissue on a screen, and cuts the carpal ligament (the tissue that holds joints together). This two-portal endoscopic surgery, generally performed under local anesthesia, is effective and minimizes scarring and scar tenderness, if any. One-portal endoscopic surgery for carpal tunnel syndrome is also available.

Although symptoms may be relieved immediately after surgery, full recovery from carpal tunnel surgery can take months. Some patients may have infection, nerve damage, stiffness, and pain at the scar. Occasionally the wrist loses strength because the carpal ligament is cut. Patients should undergo physical therapy after surgery to restore wrist strength. Some patients may need to adjust job duties or even change jobs after recovery from surgery.

At the workplace, workers can do on-the-job conditioning, perform stretching exercises, take frequent rest breaks, wear splints to keep wrists straight, and use correct posture and wrist position. Wearing fingerless gloves can help keep hands warm and flexible. Workstations, tools and tool handles, and tasks can be redesigned to enable the worker's wrist to maintain a natural position during work. Jobs can be rotated among workers. Employers can develop programs in ergonomics, the process of adapting workplace conditions and job demands to the capabilities of workers. However, research has not conclusively shown that these workplace changes prevent the occurrence of carpal tunnel syndrome.

The National Institute of Neurological Disorders and Stroke (NINDS), a part of the National Institutes of Health, is the federal government's leading supporter of biomedical research on neuropathy, including carpal tunnel syndrome. Scientists are studying the chronology of events that occur with carpal tunnel syndrome in order to better understand, treat, and prevent this ailment. By determining distinct biomechanical factors related to pain, such as specific joint angles, motions, force, and progression over time, researchers are finding new ways to limit or prevent carpal tunnel syndrome in the workplace and decrease other costly and disabling occupational illnesses.

Randomized clinical trials are being designed to evaluate the effectiveness of educational interventions in reducing the incidence of carpal tunnel syndrome and upper extremity cumulative trauma disorders. Data to be collected from an NINDS-sponsored clinical study of carpal tunnel syndrome among construction apprentices will provide a better understanding of the specific work factors associated with the disorder, furnish pilot data for planning future projects to study its natural history, and assist in developing strategies to prevent its occurrence among construction and other workers. Other research will discern differences between the relatively new carpal compression test (in which the examiner applies moderate pressure with both thumbs directly on the carpal tunnel and underlying median nerve, at the transverse carpal ligament) and the pressure provocative test (in which a cuff placed at the anterior of the carpal tunnel is inflated, followed by direct pressure on the median nerve) in predicting carpal tunnel syndrome. Scientists are also investigating the use of alternative therapies, such as acupuncture, to prevent and treat this disorder.