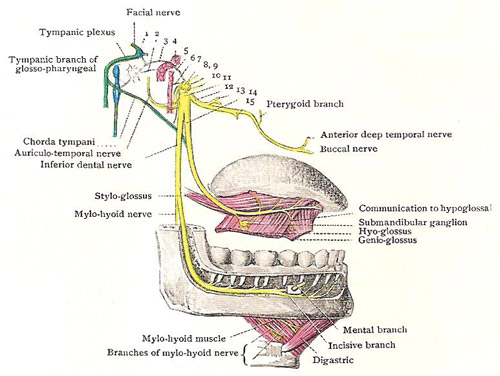 Immediately after its exit from the skull, the mandibular nerve gives off the nervus spinosus and the nerve to the medial pterygoid muscle, and, at a slightly lower level, it divides into an anterior division and a posterior division.

The anterior division is composed chiefly of motor fibers. It divides almost at once into the deep temporal nerves, the nerves to the masseter and lateral pterygoid, and the buccal nerve; all its sensory fibers pass into the buccal nerve.

The nervus spinosus is a very slender branch which enters the cranium with the middle meningeal artery through the foramen spinosum. It supplies the dura mater, and sends a filament into a middle ear.

The nerve to the medial pterygoid passes forwards to enter the deep surface of the muscle. The otic ganglion is in close relation to its commencement.

The buccal nerve is the largest branch of the anterior division. It passes between the two heads of the lateral pterygoid muscle, and then downwards and forwards over the lower head to reach the surface of the buccinator muscle. After dividing and forming a plexus with the buccal branches of the facial nerve (which supplies the motor fibers to the buccinator), it supplies the skin and the mucous membrane of the soft part of the cheek. In its course downwards, it is opposite the anterior margin of the ramus of the mandible in close relation to the deep surface of the temporal muscle – parallel with its tendinous fasciculi and within its sheath. It is often in a groove flush with the deep surface of the muscle, and may even be within its substance.

The nerve to the masseter arises in common with the posterior deep temporal. It passes laterally above the lateral pterygoid muscle and through the mandibular notch close behind the temporal muscle, and sinks into the upper part of the deep surface of the masseter near its posterior border. Before it reaches the masseter, it gives one or two twigs to the capsule of the mandibular joint.

The auriculotemporal nerve springs by two roots from the posterior division of the mandibular nerve, under cover of the lateral pterygoid. The two roots are composed of sensory fibers and each receives a communication from the otic ganglion, by means of which it is brought, indirectly, into association with the glossopharyngeal nerve. The roots embrace the middle meningeal artery, and unite behind it to form a stem which runs backwards deep to the neck of the mandible. At the interval between the ear and the mandible it turns upwards in close relation to the parotid gland, crosses the posterior root of the zygoma with the superficial temporal artery, and enters the temple, where it breaks up into terminal branches.

Its branches are: (1) A few slender filaments to the posterior part of the capsule of the mandibular joint. (2) One or two thick branches which enter the parotid gland to supply the gland and to join the upper branches of the facial nerve. (3) Auricular branches. (4) Terminal filaments to the skin over the temporal region.

The inferior dental nerve is the largest branch of the posterior division of the mandibular nerve. It emerges from under cover of the lateral pterygoid at the lower border of the muscle, passes downwards on lateral surface of the sphenomandibular ligament and medial pterygoid muscle, and enters the mandibular foramen. The inferior dental branch of the maxillary artery runs downwards behind it, and the lingual nerve is in front of it, on a rather deeper plane. It runs downwards and forwards in the canal in the body of the mandible, gives off branches to the teeth of the lower jaw, and sends the mental nerve out through the mental foramen to supply the skin of the chin and the skin and mucous membrane of the lower lip.

The inferior dental nerve is a sensory nerve, but a few motor fibers are contained within its sheath, and separate off as the mylohyoid nerve.

The lingual nerve is almost as thick as the inferior dental. It is entirely sensory and is distributed to the mucous membrane of the anterior two-thirds as the tongue. In the first part of its course, like the other branches of the mandibular nerve, it is medial to the lateral pterygoid muscle. As it descends it appears at the lower border of the muscle in front of the inferior dental nerve. It then proceeds downwards and forwards, between the medial pterygoid muscle and the mandible, and enters the submandibular region, where it will afterwards be traced to the tongue. It gives off no branches in the infratemporal region, but, while still under cover of the lateral pterygoid, it is joined by the chorda tympani branch of the facial nerve. Not infrequently, also, a communicating twig passes between it and the inferior dental nerve.