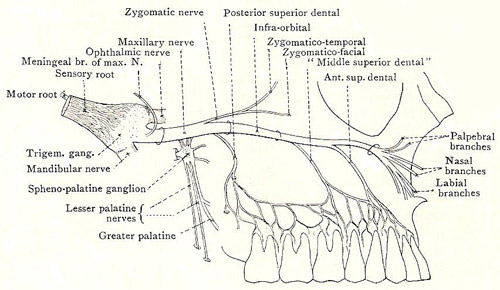 The maxillary nerve is the second of the three divisions of the trigeminal nerve. The maxillary nerve arises from the trigeminal ganglion, runs forward on the side of the body of the sphenoid bone, between the two layers of the dura mater, along the lower border of the cavernous sinus, and leaves the cranial cavity by passing through the foramen rotundum. It then crosses the upper part of the pterygo-palatine fossa and curves laterally through the pterygo-maxillary fissure to enter the infratemporal fossa. It leaves the fossa almost at once and passes through the inferior orbital fissure to become the infra-orbital nerve.

The branches of the maxillary nerve are:

1. A meningeal branch arises near its origin.
2. Two ganglionic branches arise in the pterygo-palatine fossa and join the spheno-palatine ganglion.
3. The posterior superior dental nerve and the zygomatic nerve arise during the very short sojourn of the maxillary nerve in the infratemporal fossa.
4. The infra-orbital nerve, which is the continuation of the maxillary nerve.

The posterior superior dental nerve divides into two branches which run downward over the back of the maxilla. They supply filaments to the gum and to the mucous membrane of the cheek, and then, with dental branches of the maxillary artery, enter canals in the bone by which they reach the molar and premolar teeth. The canal for the posterior or main branch curves forward to run a horizontal course between the zygomatic process and the tooth-sockets, and can be traced as far as the canine socket. The anterior branch runs its course at a higher level, and ends by joining a plexus formed in the bone by the main branch and the anterior superior dental nerve. It has been described as a middle superior dental nerve (for the supply of the premolar teeth), but it seldom arises independently from the infra-orbital nerve.

The zygomatic nerve is small. It enters the orbit through the anterior part of the inferior orbital fissure, pierces the periosteum and almost immediately divides into two terminal branches – zygomatico-temporal and zygomatico-facial – which run forward between the periosteum and the bone of the lateral wall of the orbit, and then perforate the bone to reach the skin of the temple and face.

About the middle of the floor of the orbit, it gives off a thick branch named the anterior superior dental nerve, which, with a branch of the infra-orbital artery, is conveyed to the canine and incisor teeth by a remarkably sinuous canal. The canal first runs forward in the roof of the maxillary sinus a little lateral to the infra-orbital canal; secondly, it curves medially in the anterior wall of the sinus to reach the side of the nose; thirdly, it descends toward the teeth; and, finally, it curves medially again to open to open into the nose close to the septum at the root of the anterior nasal spine. In the third and fourth parts of its course, the nerve gives branches not only to the teeth but also to the mucous membrane of the antero-inferior part of the nose. The superior dental nerves give twigs to the mucous lining of the maxillary sinus; and, from the plexus formed by their terminal branches, the gum as well as the teeth is supplied.