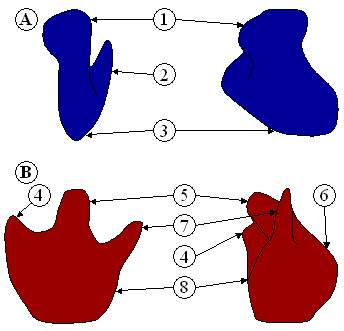 Ribosome structure indicating small subunit (A) and large subunit (B). Side and front view. 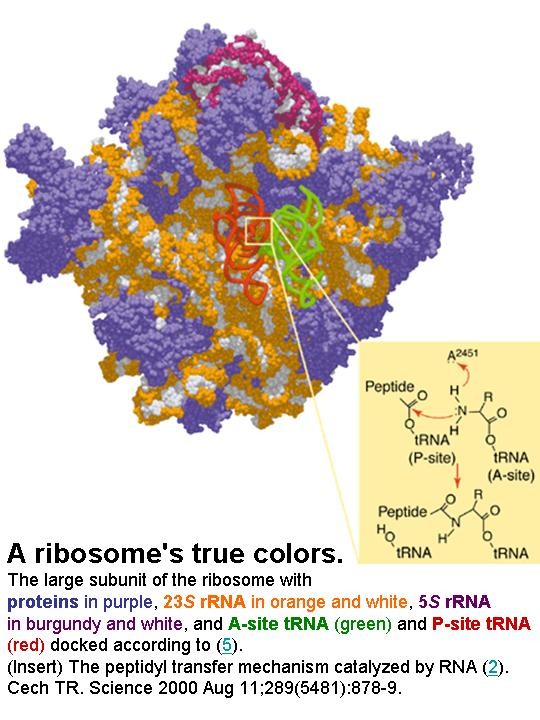 A ribosome is a tiny organelle that is the site of protein synthesis (protein translation) in the living cell. Ribosomes are complex, bead-like structures composed of about 40% protein and 60% ribosomal RNA (rRNA); they were discovered by George Palade. In eukaryotes, ribosomes are made of four strands of RNA and are often attached to the membranes of the endoplasmic reticulum to form rough ER. In prokaryotes, they are made of three strands of RNA and occur free in the cytoplasm.

Eukaryote ribosomes are produced and assembled in the nucleolus. Three of the four strands are produced there, but one is produced outside the nucleolus and transported inside to complete the ribosome assembly. Ribosomal proteins enter the nucleolus and combine with the four strands to create the two subunits that will make up the completed ribosome. The ribosome units leave the nucleus through the nuclear pores and unite once in the cytoplasm. Some ribosomes will remain free-floating in the cytoplasm, creating proteins for the cell's use. Others will attach to the endoplasmic reticulum and produce the proteins that will be "exported" from the cell.

Protein synthesis requires the assistance of two other RNA molecules. Messenger RNA (mRNA) provides instructions from the cellular DNA for building a specific protein. Transfer RNA (tRNA) brings the protein building blocks, amino acids, to the ribosome. Once the protein backbone amino acids are polymerized, the ribosome releases the protein and it is transported to the Golgi apparatus. There, the proteins are completed and released inside or outside the cell. For more details of the role played by ribosomes in protein synthesis, see protein translation.

Ribosomal DNA contains genes that code for the various forms of ribosomal RNA and the segments of DNA separating the individual ribosomal RNA genes, referred to as ribosomal spacer DNA.

Ribosomal RNA is RNA that is transcribed from the DNA of the nucleolus and is found, together with characteristic proteins, in the ribosomes (see transcription).