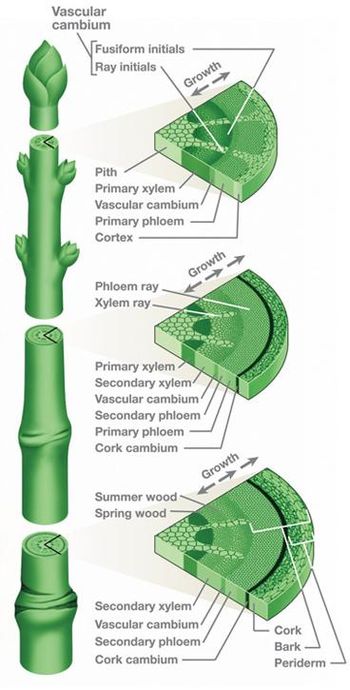 The cambium is a layer of actively dividing, meristematic tissue, two to four cells thick, parallel to the surface of stems and plant roots that divides to produce new cells to allow for growth in diameter of the stems and roots.

Once a plant cell has differentiated, it is unable to divide again. To allow for growth, certain bands of cells remain undifferentiated, retaining the ability to divide. The cambium is made up of such cells.

There are two main types of cambium, the vascular cambium and the cork cambium. The vascular cambium produces new phloem on the outside and xylem on the inside, leaving narrow bands of thin-walled cells that allow nutrients and gases to diffuse to the center of the plant. The cork cambium forms a cylinder just below the epidermis, and produces cork cells to replace the epidermis, which ruptures as the stem and root expand, forming the bark and the corky outer layer of the older root.