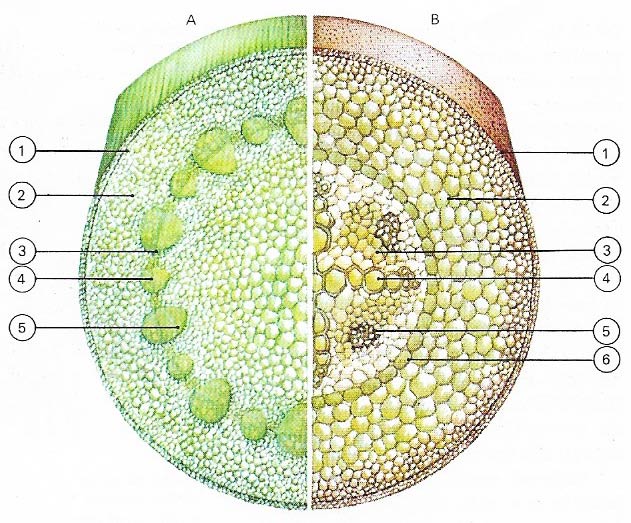 Fig 1. The hallmarks of a dicotyledon show in its stem (A) and root (B). Both are covered by epidermis (1) surrounding a cortex (2), inside which the growing layer or cambium (3) gives rise to vascular bundles containing water-conducting xylem (40 and food-conducting phloem (5). In the root a central cross-shaped pattern can be seen and there is an endodermis layer (6). 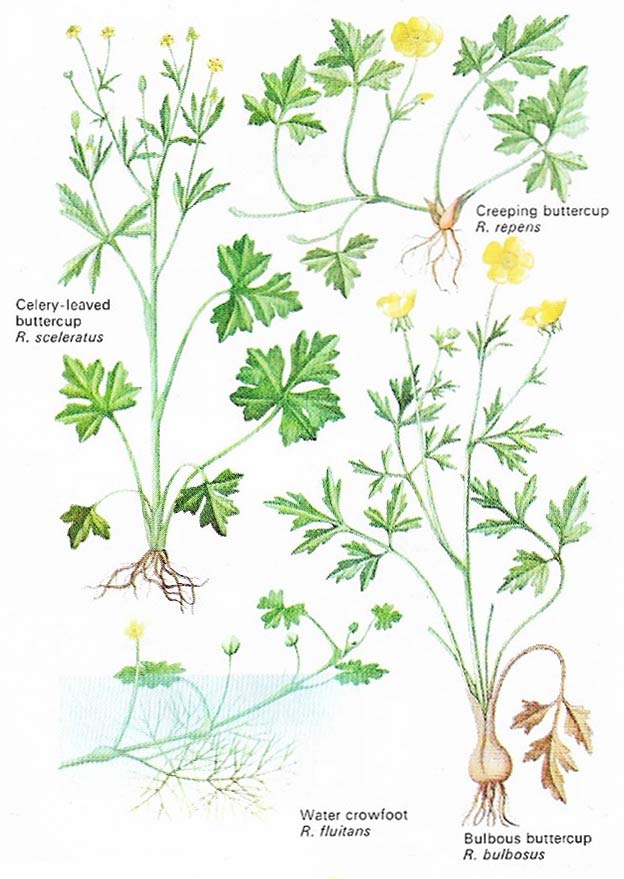 Fig 2. Buttercups are common plants of the family Ranunculaceae that very greatly in shape and size and occur in many ecological niches from water to meadows. The crowfoots are generally aquatic and have white flowers. Their leaves are of two kinds – floating and submerged. Other buttercups of different species grow on dry land, but each occupies a separate habitat and has distinctive anatomical characteristics. Ranunculus bulbosus, for example, as its name suggests, has an underground bulb. Both the creeping Ranunculus repens and bulbous buttercups are prolific weeds of meadows and gardens. 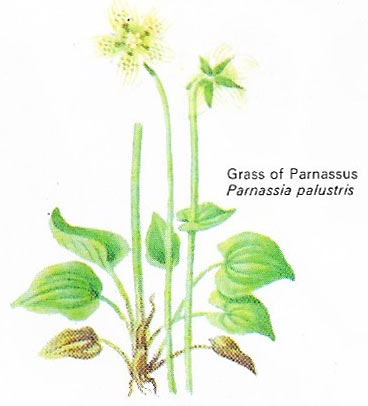 Fig 3. Grass of Parnassus is not a grass but is related to the saxifrages. It occurs in damp grassland in Europe and throughout temperate Asia. The pretty five-petalled white flower has gleaming golden pinheads called staminodes that entice insects into visiting the plant in search of nectar. This is the only means the plant has of attracting insect visitors, which then pollinate it. The flower stalk has a heart-shaped leaf, whose base surrounds the stem. 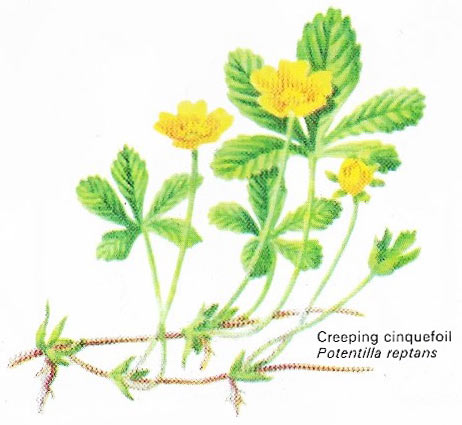 Fig 4. The creeping cinquefoil is a member of the widespread rose family and occurs as a common weed in gardens and fields. It has yellow flowers and leaves with five leaflets like the fingers of a hand. The roots grow from the stem at intervals known as nodes. 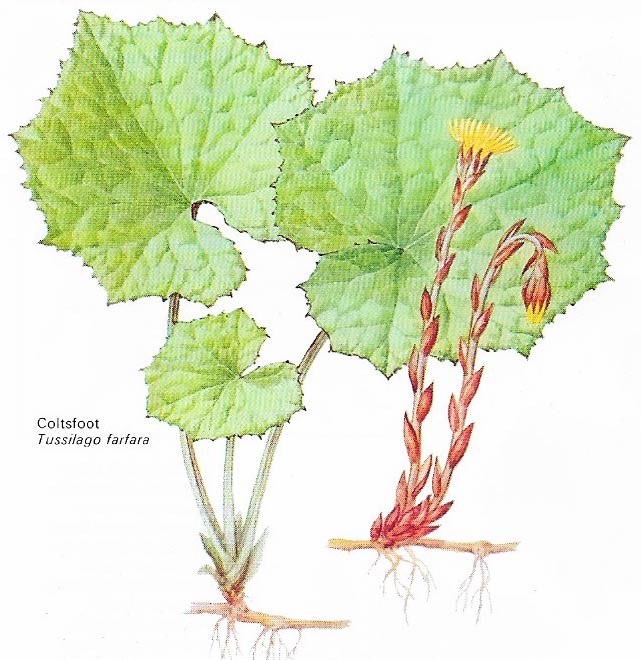 Fig 5. Coltsfoot is a well-known composite whose yellow dandelion-like flower appears before the leaves. Coltsfoot is widespread on basic soils and its leaves are used as a herbal cough cure. Its name comes from the shape of its leaves, which is similar to a horse's hoof. 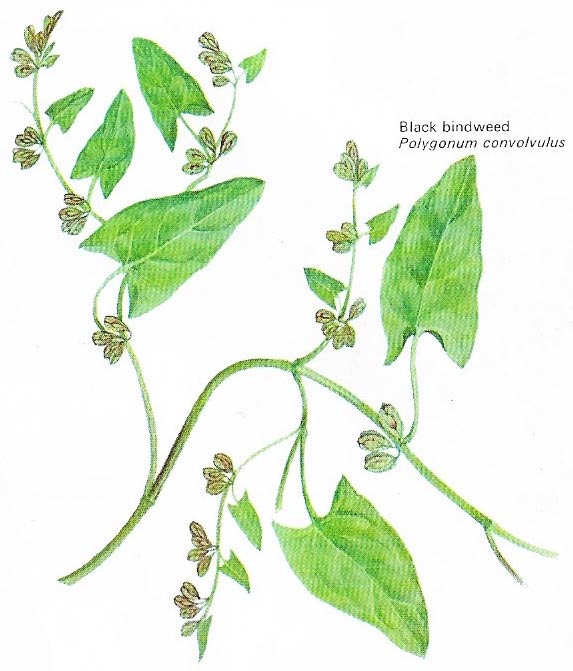 Fig 6. The knotweeds (family Polygonaceae), of which the black bindweed is one, are a group of 900 species which include in their numbers dock, sorrel, and many other common weeds. The name of the family comes from the knot-like formations that grow on the plant stems. The plants are found worldwide. 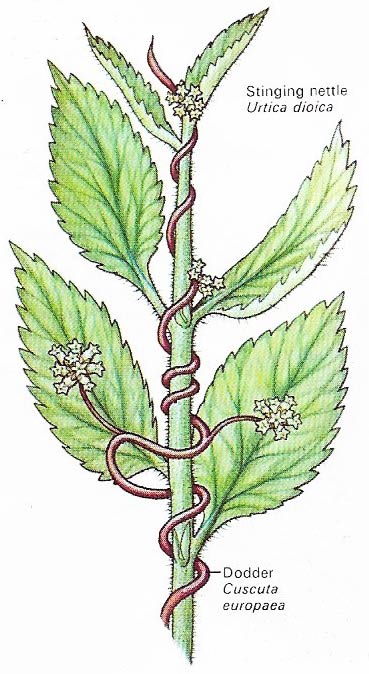 Fig 7. The parasitic dodder attacks few plants except the stinging nettle. It feeds by haustoria (1), modified "roots" that enter the host plant. 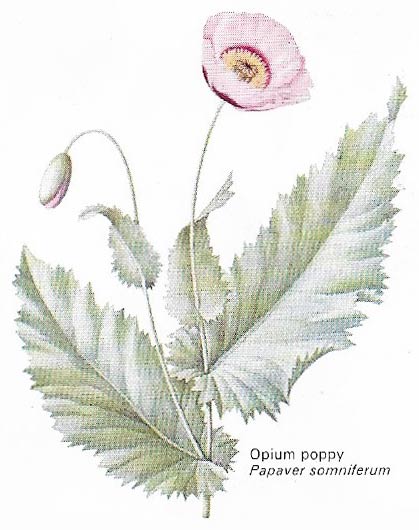 Fig 8. The opium poppy has been cultivated since the Middle Ages. The drug opium and its derivatives, morphine, and heroin, are extracted from the latex of the sed pods. The seeds themselves are used as cattle food and as a source of oil. The poppy is probably of European origin.

A dicotyledon, or dicot, is any member of the class Dicotyledonae within the phylum Angiospermophyta – angiosperms (flowering plants). Dicotyledons are characterized as having two cotyledons (seed leaves) in the seed embryo and other characteristic aspects of internal anatomy (Fig 1). Other general features include broad, net-veined leaves; flower parts (sepals, petals, stamens) arranged in whorls of fours or fives; vascular bundles arranged in a ring in the stem and root; and a taproot (main central root). There are about 250 families of dicotyledons, including the rose, magnolia, and daisy families. See also monocotyledon.

Non-woody dicotyledons occur almost everywhere; each continent has a large population,including the Arctic and the Antarctic. These plants fill many different ecological niches and colonize all types of habitat except permanent snow and ice, from natural regions such as marches, forests, rocky cliffs, and pastures to totally man-made areas such as walls, roofs, roadsides, and demolition or clearance sites. Some thrive in the driest deserts, others grow totally immersed in fresh or salt water. This last type of habitat, salt water, often causes a curious state known as physiological drought, in which the plant behaves rather like a desert cactus in retaining its internal moisture.

Almost all families of dicotyledons provide plants that are used for food or grown as ornamentals. Many buttercups (Fig 2) and their relatives (family Ranunculaceae) are grown as ornamental garden flowers: these include anemones, pasque flowers (Pulsatilla spp), delphiniums, and clematis. In the crucifer family (Cruciferae) a few species such as stocks, wallflowers, honesty, and alyssum are grown as garden flowers, but much more important are the cabbage and its many relatives of the genus Brassica. Cabbage, brussels sprouts, cauliflower, broccoli, curly kale, and many other cabbage-like vegetables are surprisingly all different forms of a single plant species. Other crucifers are rape, an important source of vegetable oil, black and white mustard, swedes, and turnips.

Another important crop family is the Solanaceae or nightshade family, which includes the potato, tomato,and many drug sources such as deadly nightshade and henbane. The daisy family (Compositae) (Fig 5) provides not only many decorative flowers but also artichokes (Jerusalem and globe), lettuce, chicory, endive, and oil crops, such as sunflower. The rise family (Rosaceae) is represented by orchard fruits (apples, pears, plums, peaches), blackberries, raspberries, strawberries, and garden flowers throughout the temperate world. Among the latter are geums, lady's-mantles, Kerria, Dryas, and, of course, roses. Besides food and ornamental plants, certain families, such as the dead nettle family (Labiatae) with its many aromatic species, have been used from ancient times as flavorings. These include mint, thyme, sage, basil, and marjoram. Fruits of certain families are also aromatic and are known as spices. Examples from the carrot family (Umbelliferae) are dill, fennel, coriander, and caraway seeds. The roots of a few species are also used as spices. Among these are horseradish and licorice.

Other plant families yield fibers for clothing or cordage. The mallow family (Malvaceae) is represented by the cotton plant, and flax belongs to its own family (Linaceae). Hemp, or Cannabis sativa (family Cannabiaceae) provides the drug cannabis and also yields the familiar cordage fiber. Some herbaceous dicotyledons grow in places where the supply of nutrients from the environment is very poor, such as bogs.

Plants have evolved to fill low-nutrient niches and in order to obtain the missing nutrients (especially nitrogen) some resort to trapping, digesting, and absorbing insects. These insectivorous species belong to several families. They include the sundews, butterworts, and bladderworts of Europe and the pitcher plants of the genera Sarracenia and Nepenthese, which are found in the tropics and subtropics. These plants have many different ways of catching their food. Sundews (Drosera spp) trap insects by means of "fly-paper". They have short tentacles coated with sticky "glue" and insects passing close to the plants or landing on them get stuck. The plants the produce digestive enzymes that dissolve the insect and the plants absorb the nutrient fluid. Butterworts (Pinguicula spp) behave similarly, but the glue over the whole leaf surface.

Bladderworts (Ultricularia spp) grow in water and have traps, each one of which is a small vesicle with a door and signal hairs growing near it. When a small water creature touches these hairs, the door opens and both water and creature rush into the trap where digestive enzymes break down the food. The pitcher plants are basically pitfall traps that attract insects and other small creatures to the top of the container,often by the promise of nectar; the victim eventually slips on the smooth surface and falls into a soup of enzymes where hairs directed downward trap it until it drowns. The best known insectivorous plant is probably the Venus fly-trap (Dionaea muscipula), the leaf of which has a hinged trap at its tip with touch-sensitive hairs. These will not respond to a single touch, but require a short burst of touches, such as that given by a moving insect to trigger a response, bringing the two halves of the trap together with a sudden snap. The trapped prey is then dissolved and digested.

flowers of wayside and hedgerow