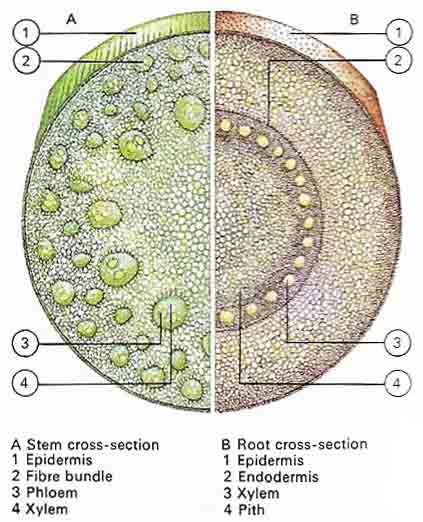 Fig 1. Monocotyledonous stems have an irregular arrangement of the food- and fluid-carrying tubes, the phloem and xylem. In the stem (A) they are scattered, but in the root (B) they are central. 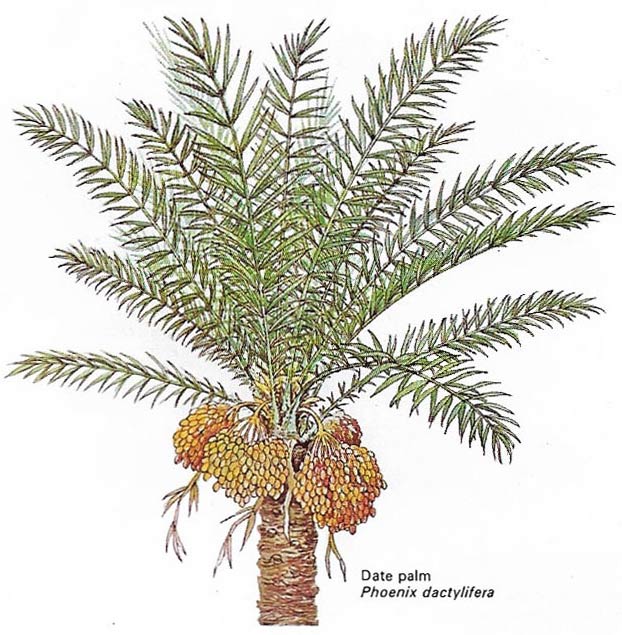 Fig 2. The date palm with its graceful column-like trunk, can grow up to 30 m (100 ft) in height and live for 200 years often in arid conditions. The tree bears either male or female flowers and its fruit has been a staple food in North Africa and India for centuries. 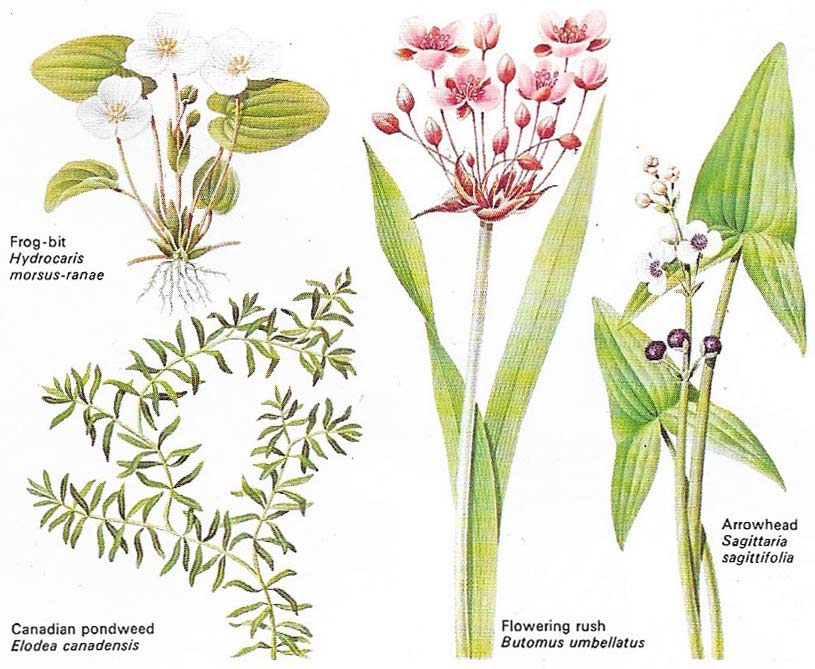 Fig 3. Aquatic monocotyledons clearly show a parallel leaf venation and those with conspicuous flowers, such as frog-bit, flowering rush, and arrowhead, have the typical three petals. The plants can be bottom-rooted or free-floating and may grow their leaves and flowers above the surface. Canadian pond weed, which is free-floating and submerged, has tiny flowers that grow on long stalks to the surface. Other species have small flowers that open under water, some consisting only of an ovary and stamens. 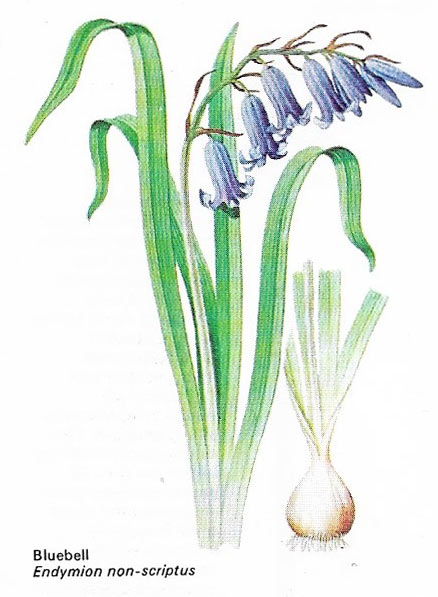 Fig 4. The bluebell is a spring flowering bulb that is found in woodlands throughout Europe. Most bulbous plants, for example tulips and daffodils, are monocotyledons. The bulbs are food storage organs for the plants and provide a means of vegetative reproduction. 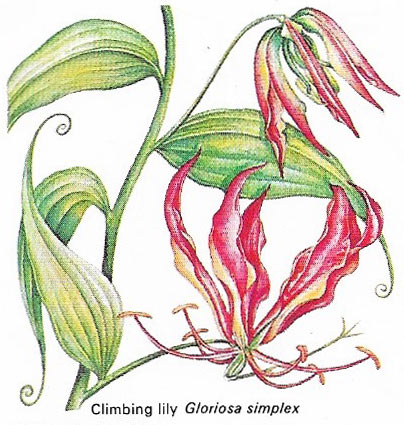 Fig 5. The climbing lily is a native of Africa. The lily family includes cultivated species and is widespread and varied. It includes many of the most fragrant and beautiful of all flowering plants. 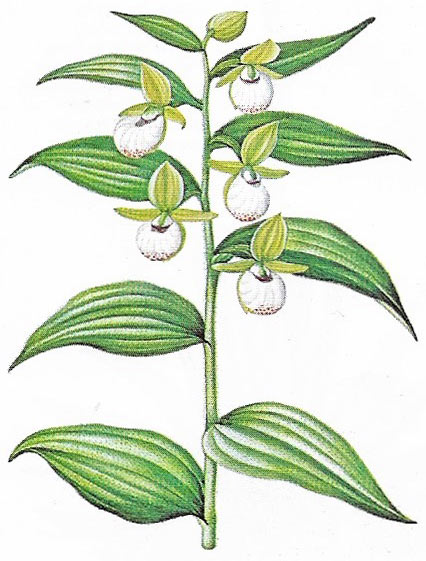 Fig 6. The Californian lady's slipper orchid is so named for the distinctive slipper shape of the large concave lower petal or lip. There are 50 species of lady's slipper orchid, in a variety of showy colors and shapes, growing in tropical and temperate areas of the world. 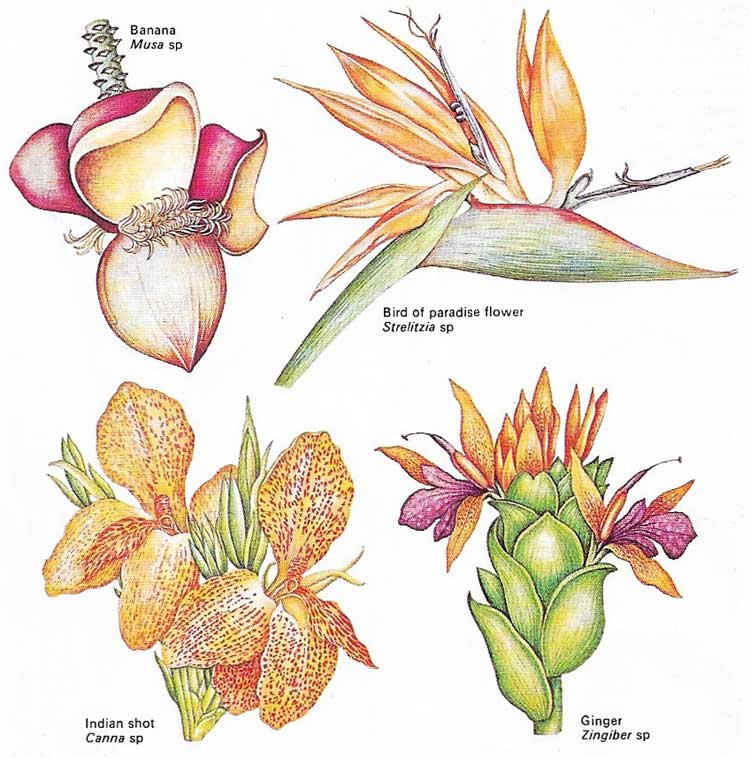 Fig 7. Flowers of the banana group Zingiberales, such as the bird of paradise, Indian shot, banana,

A monocotyledon is a member of the smaller of two major classes into which angiosperms (flowering plants) are divided. Monocotyledons, or monocots, are distinguished from the larger class, the dicotyledons, by the presence of a single cotyledon (seed leaf) in the embryo and by other structural features, e.g., parallel veined leaves, stem vascular tissue in the form of scattered closed vascular bundles, and flower parts usually in threes or in multiples of three. A few monocotyledons, such as palm trees, are large plants, but the majority are small. The group includes many important food plants, including cereals, fodder grasses, bananas, and palms, and ornamental plants, such as lilies, tulips, and orchids.

The monocotyledons and dicotyledons, as mentioned, are distinguished by several features aside from the number of seed leaves they possess. In the monocotyledons the food and fluid transport system is grouped into closed, scattered vascular bundles (Fig 1). The leaves have parallel veins and usually no distinct central vein or midrib. The flower parts of monocotyledons are arranged in threes, usually with three or six petals. Those few species that are woody have no bark. Pollen grains of monocotyledons bear only a single burrow.

The food and fluid transport system of the dicotyledons is made up of vascular bundles arranged in a single ring within the stem. The leaves have a network of veins and a distinct midrib. Flower parts have a five-, a four-, or more rarely, a two-fold arrangement. There are many woody species all of which have bark. The pollen grains of dicotyledons have three flowers.

Throughout the world there are some 55,000 species of monocotyledons, forming about a quarter of all flowering plants, including the grasses, palms, and orchids. They show a considerable range of form, and leaf size in this group can vary from a few millimeters to the 20 m (65 ft) long leaf of the raffia pal (Raphia ruffia). The flowers of many families also show considerable variety and include the lilies (Liliaceae) (Fig 5), orchids (Orchidaceae), pineapples, and other bromeliads (Bromeliaceae) as well as the palms (Palmaceae), sedges (Cyperaceae), and grasses (Gramineae).

Flowering monocotyledons include many of the most beautiful and ornamental garden plants, as well as decorative aquatic plants (5). The lilies are widespread garden plants, together with species of narcissus (Amaryllidaceae) and irises (Iridaceae). Other striking examples of flowers in this group are the bird of paradise flowers and canna flowers (Fig 7).

The orchid family (Fig 6) displays a particular wealth of brilliant blooms, but even the most irregular and intricately shaped of orchid flowers still retain the characteristic three-fold monocotyledon arrangement of the flower parts, although this is sometimes hard to detect. Another large group of versatile and curious monocotyledon plants is found in the pineapple family. Most of these grow on other plants especially trees (as such they are called epiphytes), a few are terrestrial plants. Members of the pineapple family grow throughout the American tropics, in deserts, jungles, or on salt-saturated beaches, and from sea level to mountain slopes. A characteristic of many plants in this family is that the color of the leaves changes when they flower.

Monocotyledons are widely distributed round the world. They range from palms, which flourish in the tropics, to the bog-cottons, which cover vast expanses of the Arctic tundra. Many of these single seed leaf plants provide food, such as grain crops useful to man, and are therefore of considerable economic value.

The palms are of immense economic importance because they produce food, timber, wax, oil, sugar, wine, and fiber. Species of palms vary greatly in size and form. A few are slender climbers, but most have a characteristic appearance of woody trunks without branches, topped by a crown of large, stiff leaves. They have small individually inconspicuous flowers, usually in large clusters, and the variable fruit may be berries (the date) or drupes (the coconut).

The coconut palm (Cocosnucifera) can be used in many ways and is considered to be the most valuable of all palms. Another valuable species, the date palm (Phoenix dactylifera) (Fig 2), has flower clusters that may contain as many as 10,000 blossoms. To ensure good yields of fruit, growers sometimes hang branches of male flowers on the flowering female tree. Dates are especially nutritious and in northern parts of Africa they are a staple food of humans and other animals.

Members of the grass family are probably among the most important of all the plants. The family is large, containing more than 600 genera and 10,000 species distributed throughout the world. Grasslands flourish in regions where rainfall totals 25–75 cm (10–30 in) annually. Many grass species are of vital importance to man and animals in the form of crops such as grain or green pasturage as well as being used for a variety of products such as fibers and building materials.

Bamboos are grasses and with a few exceptions are tropical. The mountain species are able to withstand the cold of high localities. The woody, hollow stems, which are tough, stringy, and braced by solid cross joints, have great strength. The bamboo grows profusely in Southeast Asia and its stems can even be used for reinforcing concrete. Bamboo shoots are also the staple diet of the giant panda.