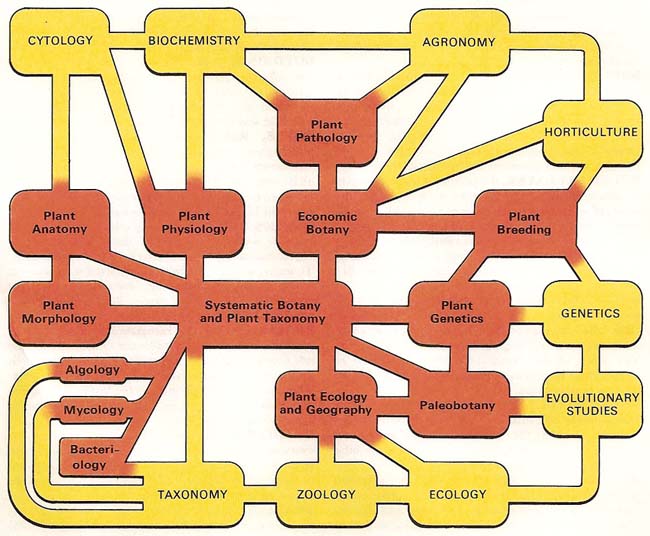 The different branches of botany (red) and their links with allied sciences (yellow). 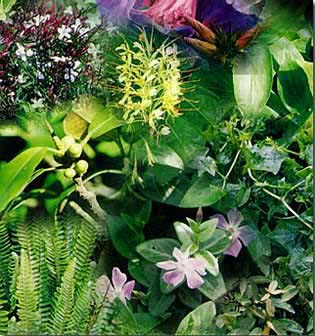 Botany is the study of plant life. Botany and zoology are the two major divisions of biology. There are many specialized disciplines within botany, the classical ones being morphology, physiology, genetics, ecology, and taxonomy. Although the present-day botanist often specializes in a single discipline, he or she frequently draws upon techniques and information obtained from others.


Areas of study within botany

The plant morphologist studies the form and structure of plants, particularly the whole plant and its major components, while the plant anatomist concentrates upon the cellular and subcellular structure, perhaps using the electron microscope. The behavior and functioning of plants is studied by the plant physiologist, though since she frequently uses biochemical techniques she is often called a plant biochemist. A plant geneticist uses biochemical and biophysical techniques to study the mechanism of inheritance and may relate this to the evolution of an individual. An important practical branch of genetics is plant breeding. The plant ecologist relates the form (morphology and anatomy), function (physiology), and evolution of plants to their environment. The plant taxonomist, or systematic botanist, specializes in the science of classification, which involves cataloging, identifying, and naming plants using their morphological, physiological, and genetic characteristics. Cytology, the study of the individual cell, necessarily involves techniques used in morphology, physiology, and genetics.

Within these broad divisions there are many specialist fields of research. The plant physiologist may, for instance, be particularly interested in photosynthesis or respiration. Similarly, the systematic biologist may specialize in the study of algae (algology), fungi (mycology), or mosses (bryology). Other specialists study the plant in relation to its uses (economic botany), plant diseases (plant pathology), or the agricultural importance of plants (agricultural botany).

The forerunners of botanists were men and women who collected herbs for medical use long before philosophers turned to the scientific study of nature. However, the title of "father of botany" goes to Theophrastus, a pupil of Aristotle, whose Inquiry into Plants sought to classify the types, parts, and uses of the members of the plant kingdom. Passing over the work of the elder Pliny and that of his contemporary, Dioscorides, botany received few further lasting contributions until the Renaissance, the intervening period making do with the more or less fabulous "herbals" of the medical botanists. The most famous pre-Darwinian classification of the plant kingdom was that of Linnaeus, in which modern binomial names first appeared (1753). While Nehemiah Grew and John Ray had laid the foundations for plant anatomy and physiology in the 17th and 18th centuries, and Hooke had even identified the cell (1665) with the aid of the microscope, these subjects were not actively pursued until the nineteenth century when Robert Brown identified the nucleus and Theodor Schwann proposed his comprehensive cell theory. The work of Charles Darwin revolutionized the theory of classification, while that of Gregor Mendel pointed the way to a true science of plant breeding.

Paleobotany is the study of ancient plants that have been preserved by carbonization, waterlogging, or freezing. Some plants have been preserved almost intact in frozen soils and in amber. Pollen is also very resistant and has characteristic patterns for identification. The earliest land plants grew in the Cambrian period, but some water plants flourished earlier. Such plants provide important evidence of ecosystems.