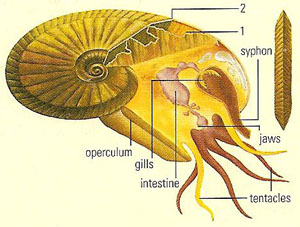 As an ammonite grew it secreted more and more shell and move forward into the new part, walling off the old section with a septum (1). The walled-off chambers were used for buoyancy, being supplied with air from a tissue filament or siphuncle (2) that connected them all. The septa met the shell wall in suture lines that had identifiable patterns for each species and became increasingly complex as the group advanced.

An ammonite is a member of an extinct group (subclass Ammonoidea) of marine cephalopods with a chambered shell. Ammonites were largely pelagic (dwellers of the open ocean) and typically spiral-shelled, of diameter 0.01–2 m (0.4 in–6.6 ft), though helical shells have been found. They first appeared about 415 million yr ago in the Paleozoic era as small straight-shelled creatures called bacrites, then quickly evolved into a variety of shapes and sizes.

During their evolution, the ammonites faced three catastrophic events that eventually led to their extinction. The first crisis occurred during the Permian period (about 250 million years ago), when nine-tenths of all ammonite species were wiped out. The survivors recovered, diversified, and went on to flourish throughout the Triassic, but at the end of this period (206 million yr ago) they faced near extinction, when all but one species died out. During the subsequent Jurassic period, the number of ammonite species rose once more. The final catastrophe occurred at the end of the Cretaceous period when the ammonites, along with the dinosaurs, and many other groups of organisms became extinct.

Although, among living species, the nautilus looks superficially most like an ammonite, in fact the closest extant relatives of the ammonites are the members of the subclass Coleoidea, which includes the octopus, squid, and cuttlefish. The extinct goniatites belonged to the same subclass as the ammonites.