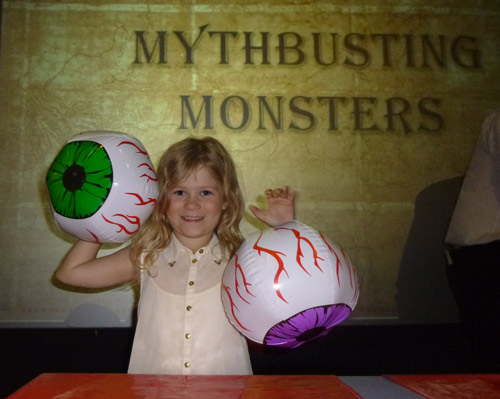 The giant squid's eyes are the largest on Earth.

Squid are diverse cephalopods which are highly adaptable to changing environments. They have been in existence for tens of millions of years.

Squid have a distinct head, a mantle, eight arms, and two tentacles, the only exception being bigfin squid which has ten long, thin arms of equal length. Squid are generally no more than 60 cm (23.6 in) in length but the giant squid can reach lengths of 13 m (42.7 ft). In 2003 the Colossal Squid was discovered and it is thought that they may grow to 14 m (45.9 ft), making them the largest known invertebrate.

The mantle is where the main body mass of a squid is enclosed; on each side of it is a swimming fin. The underside of the body has openings to the mantle cavity, which contains the gills, and to the reproductive and excretory systems. The siphon, located at the front of the mantle cavity, is used for jet propulsion: water is sucked into the mantle cavity and expelled from the siphon in a strong, fast jet. By changing the direction of the siphon, the squid is able to move is different directions with precision.

Squid have three hearts, two which feed the gills and a larger, systemic heart pumps copper-rich hemocyanin around the body. The systemic heart consists of three chambers: two upper auricles and a lower ventricle.

Attached to the head of a squid are eight arms and two suckered tentacles that do not grow back if they are severed. The mouth has a sharp beak that is used to kill and tear prey into manageable pieces for eating; inside the mouth is the radula.

On each side of its head a squid has an eye equipped with a hard lens that is focused through movement rather than change of shape. Squid have excellent eyesight, and have acute senses of touch and taste. Giant squid have the largest eyes in the world.

The squid's skin is covered with chromatophores that enable the animal to change color to match its surroundings. The underside of a squid is usually lighter in color than the dorsal surface to provide camouflage from predators and their prey.

Across the various species, squid occupy a diverse range of habitats. Some thrive in warm tropical waters while others prefer cooler waters. Although they are mainly found in salt water, some species can also survive in freshwater locations.

Squid are particularly abundant in the North Atlantic, and around the Gulf of Mexico, Hawaii, and California. In the North Pacific they have been found from the Bering Sea to the Sea of Japan; they also occur in the South Pacific. Both the Colossal squid and the giant squid can be found in the deep waters near Antarctica.

Squid are usually found at depths below 1,000 m (3,280 ft), although some species and youngsters can be found nearer to the surface. Squid are highly adaptable creatures. They are found in just about all of the major bodies of water and are able to move and thrive in different areas if they lack a food source or their natural habitat has been destroyed.

To attract females, males begin their display at dawn by rapidly swimming around in circles. Females join in and as time goes by they join up and swim around in pairs. When a female has taken an interest, mating occurs. During mating the male uses one of his arms to place sperm inside the female's ink sac where the fertilization of her eggs takes place.

A single female can produce thousands of eggs and she will distribute them in hidden places in the water. A large number of these eggs will be eaten by predators but those that remain hatch after about eight weeks. The young squid are able to fend for themselves from hatching. Squid have a short lifespan, usually 1–2 years. Usually they are able to mate only once in this time, although in some species mating can occur twice.

Squid feed mainly on fish, prawns, and other cephalopods. They tend to catch their prey by shooting out their tentacles, grasping the prey, and drawing it back toward the arms. Other methods include dragging their tentacles along the ocean floor, capturing small prey in the sticky suckers, and drawing the prey back into their arms, or dangling their long tentacles into a school of fish, grasping one, and lunging forward to grab the prey in the arms.

Squid are preyed upon by many species of mammals, fish, and birds. The most notable of these are the orange roughy fish, wandering albatrosses, and sperm and pygmy sperm whales.

To avoid predators, squid are able to rapidly swim away or squirt ink into the water to cause confusion. Some species are able to change color so they can camouflage themselves to avoid detection.

Squid belong to the order Teuthida (the largest cephalopod order) within the class Cephalopoda. The order Teuthida is divided into two major suborders, Myopsina and Oegopsina, which contain 29 families and about 300 known species.