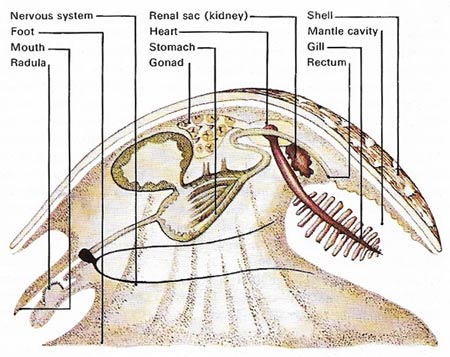 A section through a generalized mollusc shows the body mass, protected by a shell, comprising three components: head, visceral mass and a large muscular foot. The mouth leads to a stomach and intestine, which discharges through an anus. Respiration is through gills in the mantle cavity. All molluscs are variations on this plan, although it is more obvious among chitons than in the squid and octopus. 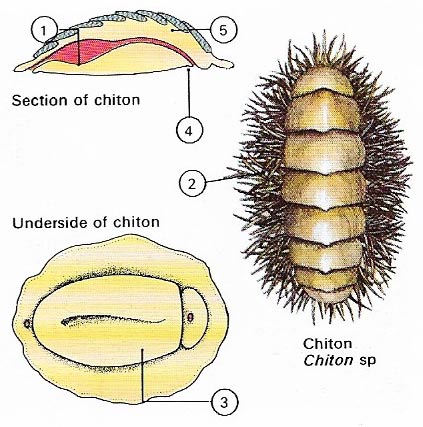 Chitons or coat-of-mail shells are among the most primitive of the molluscs. Their bodies are covered with overlapping calcareous plates (5) and in some cases a fringe of calcareous spines (2) as in Chiton. On the undersurface is an oval, fleshy foot (3) fronted by a degenerate head with a mouth (4) leading straight into the gut (1). If dislodged from the rocks, to which they are normally attached, chitons will curl up tightly. 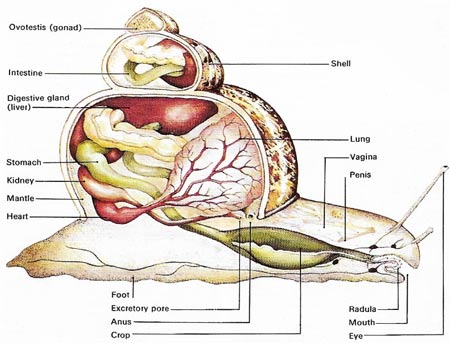 The anatomy of a snail shows a well-developed head with sensory tentacles and eyes. The foot is flattened and used for creeping. The layout of the internal organs is asymmetrical because of torsion and the coiling of the visceral hump within the shell. The mouth, inside which lies the radula, opens into an oesophagus that leads to the stomach and gut. Because of the changes due to torsion the anus opens towards the front of the animal instead of at the rear as in chitons. Most gastropods respire through a gill located in the mantle cavity, but in the pulmonate group to which land snails belong, this organ has been lost. Instead, the lining of the mantle cavity is liberally supplied with blood vessels, the whole surface acting as a lung. Air moves in and out through a small opening called the pneumostome. The nervous system is made up of paired cerebral ganglia adjacent to the oesophagus, and nerve cords reaching to the foot and the viscera.

A mollusc (spelt "mollusk" in North America) is any member of the phylum Mollusca, which includes snails, bivalves, squid, and octopuses. Molluscs are invertebrates that have fleshy, muscular bodies and typically a chalky shell for protection. They differ from arthropods and vertebrates, or back-boned animals, by the fact that they have no skeleton. A skeleton is a system of jointed or articulated parts to which the muscles are attached. It may be internal (as in the vertebrates, which includes fish, reptiles, birds, and mammals) or external (as in crustaceans and insects, which are arthropods). Many molluscs have an external shell, but it is not a skeleton. Cuttlefish have an internal shell or bone, but this is not a true skeleton either.

About 90,000 living species are known, which are divided into seven, eight, or nine classes, depending on the classification system used. The best known classes are the Gastropoda, Bivalvia, and Cephalopoda. Others include Aplacophora (solenogasters), Monoplacophora (segmented limpets), Polyplacophora (or Amphineura as it was earlier called, the chitons), and Scaphopoda (tusk shells). Two extinct species of molluscs have also been identified. Molluscs first appeared in the Cambrian period, more than 500 million years ago.

Gastropods, which include the shell-less slugs and the shelled snails, have bodies divided into a head, a visceral hump, and a muscular foot. The head bears tentacles. During development, the visceral hump twists counterclockwise through 180°, a process known as torsion.

Bivalves, which include oysters, mussels, and clams, are enclosed in shells that form a pair of hinged valves that are drawn together by an elastic ligament.

Cephalopods, which include squids, octopuses, and cuttlefish, typically bear tentacles and their shell is enclosed within their bodies. The nervous system is well developed and the eyes are extraordinarily similar to those found in vertebrate animals such amphibians or mammals. Locomotion is by crawling on the sea bed or by jet propulsion using the sudden ejection of water through a siphon.

Molluscs have certain characteristic features, which are developed in different ways in the various groups.

The foot of a mollusc is an organ situated on the ventral or lower part of the body, and consisting of a mass of muscle. In those molluscs which move about it is the organ of locomotion.

The mantle is a fold of skin, surrounding the body, and enclosing, between itself and the body, a cavity, called the mantle cavity, which contains the gills.

The shell is secreted by the mantle and varies a great deal in form. In the bivalves it consists of two saucer-shaped halves, which are usually alike in shape and size, and are hinged together. When the animal is breathing and feeding the two halves are opened. If it is alarmed or threatened with drying up, the shell is tightly closed by a powerful muscle, called the adductor muscle, which is attached to the two halves of the shell.

The shell of a gastropod, or univalve, usually has the form of a spirally coiled tube, as in the familiar snail shell, but in the limpets it is shaped like a little tent. The slugs, which have no shell at all, are gastropods, quite closely allied to snails.

The only cephalopod that has a real shell and lives inside it is the nautilus. The "bone" of the cuttlefish is really a shell which, in the course of evolution, has come to be enclosed in the body.

To people living near the shore molluscs have been an important source of food from prehistoric times. In some parts of the world large mounds and banks of shells of cockles, oysters, and other "shellfish" have been found in association with stone tools, showing that early humans availed themselves of this food supply. Today, we continue to eat a wide variety of molluscs, from land snails to squid, in large amounts.

Another product of molluscs is pearls. These have been valued as gems for thousands of years, and the first source of them was probably the freshwater mussels called Unio. When Julius Caesar invaded Britain he obtained a quantity of these freshwater pears and used them to cover a shield, which he placed in the temple of Venus in Rome.

Now almost all natural pearls are obtained as a by-product of the pearl-shell industry, which depends on marine oysters of the genus Pinctada; this oyster has a big, flat shell, very different from that of the edible oyster. The pearl oyster flourishes in tropical waters and its shell provides material for ornaments and buttons.

A pearl is formed when a parasite or grain of sand gets into the tissue of the mantle, which slowly covers it with layers of the same substance that forms the mother-of-pearl inner surface of the shell. Oysters can also be induced to make pearls "to order." This is done by first making a tiny pellet of shell; the pellet is covered with living tissue from the edge or shell-making part of the mantle of an oyster, and then carefully inserted into the mantle of another oyster, which is replaced alive in the water. The pearl is gradually formed around the little ball of shell, the process usually taking about seven years. These are the well-known "cultured pearls."

The people of the early Mediterranean civilizations made a purple dye from a secretion of the rock whelk, Murex trunculus. Tyre was the most important center of production, and the dye became known as Tyrian purple. It was considered very precious, and only wealthy and important people were allowed to use it.

A few molluscs are dangerous. The beautiful cone shells of tropical coral reefs when alive are equipped with a proboscis carrying a "sting" which is extremely poisonous. People have died as a result of being stung by a cone shell.