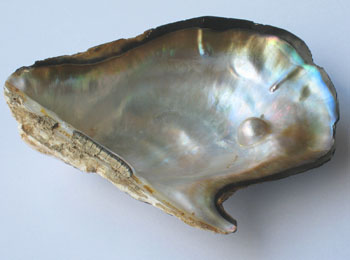 A pearl is a hard, smooth, iridescent concretion produced by a bivalve mollusk, particularly the Pearl oyster, Pinctada. In response to an irritation by foreign matter within the shell, the mantle secretes calcium carbonate in the form of mother-of-pearl (nacre) around the irritant body. Over several years, the encrustation forms the pearl. Cultured pearls may be obtained by "seeding" the oyster with an artificial irritant, such as a small bead. Pearls are variable and may be black or pink as well as the usual white. Another bivalve group producing marketable pearls is the freshwater Pearl mussel, Margaritifera margaritifera.