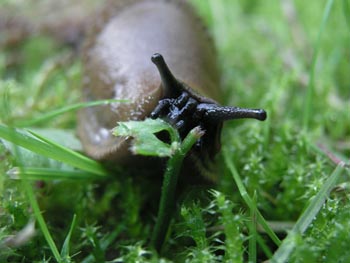 Arion vulgaris, also known as the Spanish slug, eating in the garden.

Slugs are one-footed gastropod molluscs that are often described as 'snails without a shell.' Like snails they are pulmonates (lung breathers). The various groups of slugs probably arose from several small groups by gradual reduction of the shell and the coiled visceral hump.

Slugs are generally gray, brown, or black but there are some more brightly colored species such as the banana slug which has distinctive yellow coloring. The largest species of slug is Limax cinereoniger, which is found in Europe and can grow to lengths of 30 cm (12 in).

Slugs prefer moist environments and are usually more active after rain. During periods of warm weather they hide in damp places to avoid the Sun. During the winter months, in temperate climates, some species of slug hibernate underground but in other species the adults die in the autumn.

Slugs are all descended from snails that over time have lost or greatly reduced their shells. Most species of slug retain a remnant of their former shell, which is now an internal organ used to store calcium salts and protect the respiratory chamber. Some slugs have no shell at all.

Slugs usually have two pairs of feelers or tentacles on their head; the upper pair is used to sense light and the lower pair to provide a sense of smell. These tentacles are fully retractable and if a slug loses one, it can be regrown. Slugs have a guillotine-like jaw and a mouth with a radula that has thousands of backward-pointing teeth.

On the dorsal surface, behind the head, is the saddle-shaped mantle and beneath this are the genitalia opening and anus. On one side of the mantle, usually the right-hand side, is a respiratory opening called a pneumostome. This is easy to locate when it is open but very difficult to see when closed.

In order to survive, slugs must generate a thick, protective mucus to cover their body, which is mostly made of water and prone to desiccation. They also produce two other types of mucus; one is thick, sticky, and spreads from the front of the foot to the back, and the other one is thin, watery, and spreads from the center of the foot to the edges. These contain fibers that help prevent slugs from slipping down vertical surfaces. The trail of slime left behind as slugs move has two other uses: it helps carnivorous slugs find prey, and helps other slugs detect a mate.

Slugs are found are found in a variety of moist habitats. During the day they hide in soil crevices and holes, under leaves, and among debris to avoid predators and becoming dried out by the Sun.

Slugs have both male and female reproductive organs. Normally they cross-fertilize to reproduce, but are able to reproduce on their own if necessary. After a mate has been located, the two slugs encircle each other and sperm is transferred via their protruded genitalia. After mating, clusters of 3–80 eggs are laid under wood or debris in crevices or holes in the ground. The eggs are round or oval shaped, white or transparent. Slugs can lay eggs up to six times per year. After a few weeks the eggs hatch but can lay dormant until sufficient moisture is available.

Apophallation is common in slugs. This happens when the male genitalia become entangled during mating so the only way the individuals can separate themselves is by chewing of each other's penis. After the penis has been removed reproduction is possible only by using the female genitalia.

Slugs have a large appetite and generally feed on fungus, dead leaves, decaying vegetables, and living plants. Some slugs are carnivorous and feed on earthworms, snails, other slugs, and carrion.

Slugs have many predators, including birds, snakes, rats, frogs, toads, salamanders, caecilians, turtles, hedgehogs, beetles, other slugs, and humans. When it comes under attack a slug can contract its body making itself harder and more compact; it then excretes a slippery, foul-tasting mucus making it difficult and unpleasant to be grasped by predators. Some species of slug are able to amputate part of their tail to distract predators while they escape.

Slugs belong to the class Gastropoda and, within this, an informal group known as Pulmonata, which consists of air-breathing slugs and snails. Pulmonata includes six orders, two of which, Onchidiacea and Soleolifera, contain only slugs. A third order, Sigmurethra contains various clades of snails and semi-slugs as well as slugs.