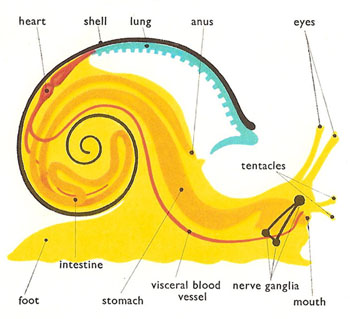 Anatomy of a snail. 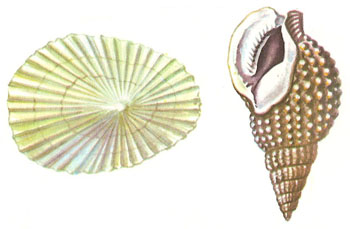 Marine gastropods. (Left) A limpet (Patella vulgaris); (right) a netted dog-whelk (Nassarius reticulatus). Limpets live attached to rocks between tide marks, gripping so tightly that even the strongest waves can't break their hold. The netted dog-whelk preys on other molluscs, piercing their shells with its proboscis. 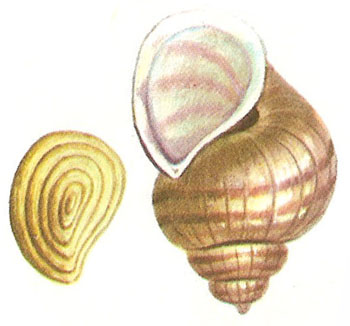 A land snail (Helix nemoralis). When snails hibernate in the winter, the opening of the shell is closed by a plug of dried slime called the epiphragm. This is not the same as the operculum of the freshwater snail, which is part of the animal's body.

A gastropod is any member of the class Gastropoda of the phylum Mollusca. Gastropods are the most diverse and abundant type of mollusc, with nearly 35,000 living and 15,000 fossil species identified to date. The group includes snails, slugs, conchs, whelks, and limpets. Like the familiar snail, most gastropods have a single coiled shell (slugs being a notable exception).

In a typical shelled gastropod, such as the snail, the soft body parts include those that normally extend outside the shell – the head and foot – and those that remain inside – the mantle and visceral mass. Because the fossil record of gastropods is based almost exclusively on the shells, paleontologists rely on living gastropods for information about the anatomy of their ancient relatives.

The foot is typically a broad, tough, muscular structure with a flattened base; it moves along a surface by means of small undulations. In land snails or slugs, the foot contains mucous glands that secrete a slimy substance that facilitates progress over a dry surface; a similar kind of lubricating substance is also secreted by some marine snails.

Inside the shell, the mantle is a heavy fold of tissue that covers the visceral mass and lines the inside of the gastropod shell. The mantle also secretes the shell. The visceral mass fills the shell cavity (which can be a very long, narrow, twisted space) and contains the heart, gonad, digestive gland, liver, kidney, and excretory organs.

The gastropod shell forms a hollow, twisted or coiled cone that increases in width from its initial point, called the apex, to the opening from which the head and foot protrude. In many gastropods, a platelike cover, the operculum, is attached to the foot and closes the shell opening when the head and foot are retracted within the shell.

The shells of different gastropods vary enormously, and these variations are used to distinguish one species from another. Most gastropod shells are coiled. This coiling may be in one plane, similar to the shells of coiled ammonites. Other gastropod shells may be coiled in such a way as to produce spires of varying heights. The outer surface of the shells may be ornamented with ridges, grooves, bumps, spines, or other markings.

The earliest gastropods were exclusively marine, but by the Mesozoic era, about 248 million years ago, many had adapted to terrestrial and freshwater environments. During their long history, gastropods have developed many different ways of obtaining food. Some are carnivores, while others are herbivores, omnivores, deposit feeders, scavengers, suspension feeders, and parasites. Some carnivorous gastropods use their radula to rasp through the shells of other gastropods or bivalves, drilling a neat, round hole, through which they inject a muscle relaxant. Fossil shells with drill holes are evidence of gastropod predation, probably dating back to the Devonian Period (415 to 360 million years ago).

The long fossil record and present-day abundance and diversity of gastropods attests to their evolutionary success. Over time, they have withstood a number of major extinction events that wiped out other creatures.