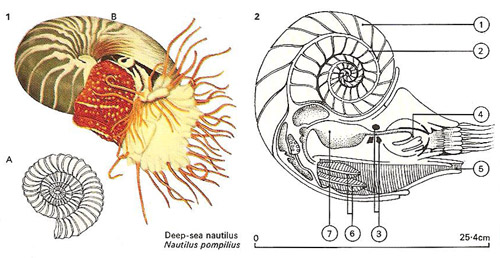 Nautilus is one of the few surviving animals resembling the primitive or original cephalopods. The fossilized shells of these extinct forms, called ammonites (A), are quite common. (B) is a deep-sea species Nautilus pompilius that lives in tropical waters. To the right is a section through Nautilus showing the shell (1) and siphuncle (2) wound in a spiral. Immediately behind the tentacles lies the mouth (4) leading to the intestine (7). Nautilus has an advanced nervous system with a brain (3) and respires by means of gills (6) that are located in the mantle cavity. It swims by forcing a jet of water out of its mantle cavity and through the siphon (5).

Nautiluses first evolved in the Cambrian period and became significant marine predators during the Ordovician period. Fossil records show that that have not changed much over the last 500 million years.

Nautiluses swim by drawing water into the chamber where they live and expelling it by jet propulsion. They adjust their buoyancy by pumping gas and fluid into or out of the chambers in their shell and because of this they cannot operate under the extreme pressures found below 800 m (2,624 ft).

Nautiluses have a prominent head and approximately 90 slim tentacles arranged in two circles. The tentacles do not have any suckers and are retractable. They stick to prey due to having a ridged surface, and nautiluses have an extremely powerful grip. Two pairs of tentacles are separated from the rest and are called the pre-ocular and post-ocular. They are situated just before and behind the eye, are more obviously grooved, and serve an olfactory purpose. There are two pairs of gills, and the radula is wide and has nine teeth.

Nautiluses are the only living cephalopod whose bony structure is a shell. They can withdraw completely into their shell and close the opening with two specially designed tentacles. The shell is coiled and pressure-resistant up to a depth of around 800 m (2,624 ft), after which it would implode. It is composed of two layers: a matte white outer later and an iridescent inner layer. Internally the shell is divided into chambers and the chambered section is called the phragmocone. Each division is defined by a septa and is pierced by a duct called a siphuncle. As nautiluses grow they create larger chambers to make space for their growing body and seal each vacated chamber with a septum. When a nautilus hatches its shell has four chambers but thsi number climbs to 30 or more by the time the animal reaches maturity.

The color of the shell helps to keep nautiluses cryptic in the water. When looked at from above the shell is darker and covered in irregular brown stripes which helps the nautilus blend into the dark water below. However when seen from the underside the shell is white, making it difficult to discern from the bright water near the surface.

Nautiluses do not have a good sense of vision. Their eyes are well developed but they lack a solid lens and are instead simple pinhole eye. Nautiluses are thought to use olfaction as their main sense for detecting prey and identifying mates.

Nautiluses are only found in Indo-Pacific waters and inhabit the deep slopes of coral reefs.

After reaching sexual maturity nautiluses breed once per year. Males have a sexual organ called a spadix which is made up of four modified, fused tentacles. The male uses his spadix to pass sperm to a female during mating. The female then fertilizes approximately twelve eggs and deposits them in shallow waters, either one at a time or in small groups throughout the year. The eggs are large, usually more than 2.5 cm (1 in) long, and take 9 months to a year to incubate. When the youngsters hatch they are around 3 cm (1.2 in) long. Nautiluses are the only cephalopods to breed annually.

Nautiluses feed on small fish, shrimp, and crustaceans, capturing them with their tentacles, A they use very little energy when swimming, nautiluses need to feed only about once a month.

Nautiluses are protected by their shell but sharks, octopus, triggerfish, and turtles are able to penetrate these shell.

Nautiluses belong to the family Nautilidae of the class Cephalopoda. The family is grouped in two genera: Allonautilus and Nautilus and within these there are six extant species and several extinct species.

The six living species of nautiluses are:

• Nautilus comes from the Greek word for sailor.
• Nautiluses are described as living fossils as they have virtually remained unchanged for millions of years.