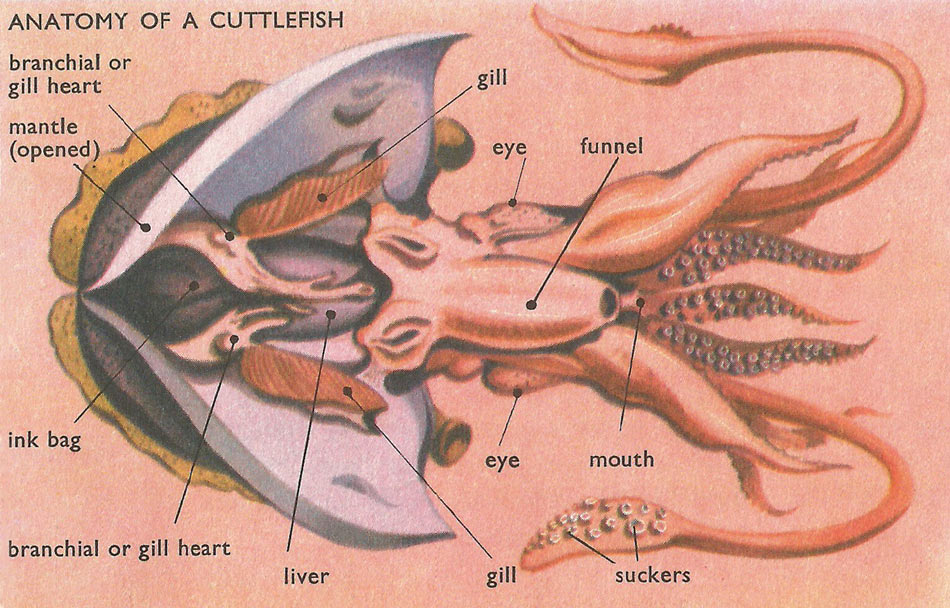 Anatomy of a cuttlefish. 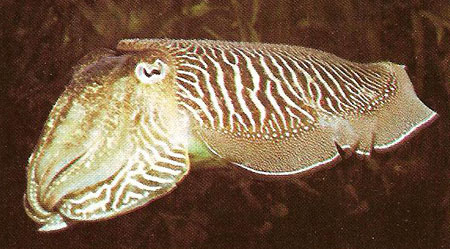 The cuttlefish Sepia officinalis lives on the sea bottom where it feeds on shrimp. It is able to uncover these by blowing jets of water at the sand of the sea-bed. In a similar way the animal can bury itself by blowing the sand from below and allowing the particles to fall back on to its upper surface. 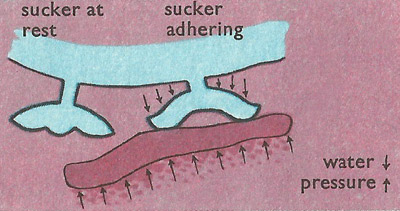 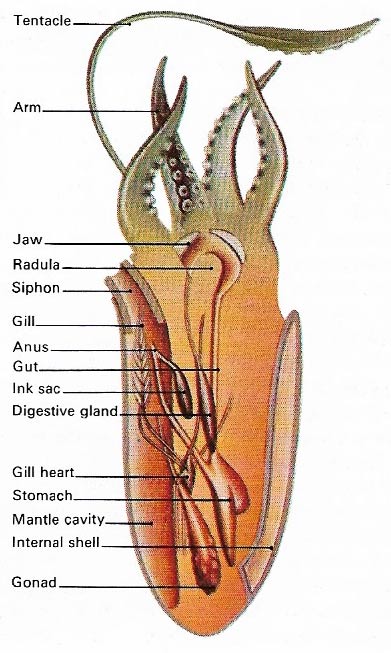 The cephalopods or "head-footed" animals, such as this cuttlefish, are the most advanced of the molluscs. The mouth is surrounded by sucker-bearing tentacles and equipped with horny jaws. A muscular mantle covers the cavity that houses the gills. Through these, a pair of gill hearts pump blood. All cephalopods can move by forcing a jet of water out of the mantle cavity and through a tube, the siphon. A dark fluid is discharged from the ink sac when the animals are excited or frightened. The shell is large and external in nautiloids, smaller and internal in squids and cuttlefish and completely absent in octopuses.

Cuttlefish are marine animals that are closely related to squid, octopuses and nautiluses. Despite their common name, they are not fish but cephalopods within the phylum of molluscs.

Cuttlefish have short, broad, flattened bodies and 10 tentacles, 8 of which have suction cups on their inner surface and 2 of which are longer and are used for catching prey. They move around by undulating their skirt-like fins or, if they need to swim quickly, they force water out of a siphon to jet propel themselves along. They can be various colors and can rapidly change color to hide themselves or as a means of communication. Cuttlefish have a life expectancy of 1–2 yr.

All cuttlefish have an ink gland and an ink sac. These are specializations of the rectal gland and the dark colored ink is mainly composed of melanin. If a cuttlefish feels threatened it expels ink from the sac to warn off predators.

Cuttlefish have an internal structure called a cuttlebone which is porous to provide the animal with buoyancy. The cuttlefish can regulate its buoyancy by changing the gas to liquid ratio in the cuttlebone via the ventral siphuncle. The cuttlebone is unique to cuttlefish and each species has a distinct shape, size and texture to its cuttlebone.

Cuttlefish have 10 tentacles, two of them longer than the rest, which rise in a ring around the head. They are covered with numerous suckers that enable the animal to grip very tightly, even on a perfectly smooth surface like glass.

Cuttlefish have eyes that are among the most developed in the animal kingdom. The pupil has a smooth curving "W" shape and although cuttlefish can't see color, they can perceive the polarization of light which enables them to have an enhanced perception of contrast. They have two areas of concentrated cells, known as fovea, on their retina, one of which looks more forward and the other backward. To change focus the entire eye is reshaped, instead of just the lens as in the case of humans.

Cuttlefish have the ability to rapidly change the color of their skin in order to camouflage themselves and to communicate with others of their kind. The ability to change color is due to groups of red-, yellow-, brown-, and black-pigmented chromatophores above a layer of iridophores and leucophores; there may be up to 200 of these per square millimeter. The chromatophores have a sac of pigment, a large membrane and 6–20 small muscle cells on the sides which can contract to squash the elastic sac against the skin. The chromatophores can be used in combinations to create different colors and also with iridophores to increase brightness.

Cuttlefish have blood that is blue-green in color due to the presence of the oxygen-carrying protein hemocyanin. There are three hearts, two which pump blood to each of the cuttlefish's gills and another which pumps blood around the rest of the body.

Cuttlefish inhabit tropical and temperate waters and can be found along the coasts of south and east Asia, Africa, Australia, western Europe, and the Mediterranean. They prefer shallow waters although they are known to go to depths of 600 m (1,969 ft).

They are absent from the coasts of the Americas as it is thought that by the time they evolved in the old world, the waters of the North Atlantic were to cold and deep for them to cross.

Cuttlefish usually breed once a year. Males signal their intent to mate by changing the color of their skin. If a female is receptive, the male and female face each other and the male passes a spermatophore into a pocket near the female's mouth. After mating males sometimes guard females to prevent them mating with other males.

Once the spermatophore has been passed to the female it bursts and the sperm move along the oviduct to fertilize the eggs. The eggs are usually round or cylindrical shaped and up to 200 are laid on the seabed, usually attached to a rock or coral. The eggs hatch after 1–2 months and the youngsters are tiny versions of their parents. The male and female both die after mating.

Cuttlefish feed on small crabs, fish, shrimp, octopuses, worms, molluscs, and other cuttlefish. They use their camouflage to hunt and get close to their prey. When they are close enough they open up their arms and shoot out two feeding tentacles. On the end of each tentacle are pads that are covered in suckers, which the cuttlefish uses to grab their prey and pull it back toward their beak.

Predators of cuttlefish include dolphins, sharks, fish, seals, and other cuttlefish. The animal's first form of defense is to camouflage themselves so they go unnoticed but if this fails they squirt their ink into the water to disorientate their predator.

Cuttlefish belong to the class Cephalopoda and within this the order Sepiida. They are grouped into five genera: Sepiadarium, Sepioloidea, Metasepia, Sepia, and Sepiella and within these there are over 120 recognized species.