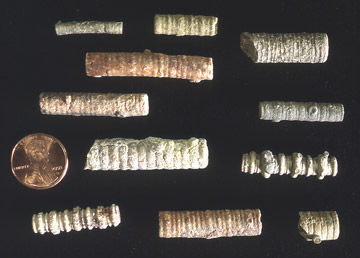 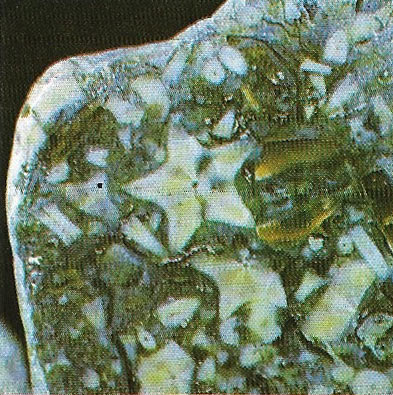 The star-like stem of an extinct crinoids or sea lily (Pentacrinus sp) is a common fossil in sedimentary Jurassic rocks. More than 5,000 fossil crinoids are known, the oldest of which dates from the Ordovician period over 430 million years ago. Their hard skeletons fossilized easily and most marine limestones contain fragments or even whole fossils, often in such quantities as to make up the bulk of the rock.

A crinoid is any member of the class Crinoidea, of the phylum Echinodermata (see echinoderm), which includes the sea lilies and feather stars.

In general, crinoids have three main body parts. The first, the stem, attaches the animal to the ocean floor and consists of disk-shaped pieces stacked on top of each other. These stem pieces come in a variety of shapes – round, pentagonal, star-shaped, or elliptical – and each stem piece is perforated in its center.

At the top of the stem is the cuplike calyx, which contains the mouth, the digestive system, and the anus. The lower part of the calyx is made up of rigid, five-sided plates, arranged radially in rows of five. These plates form the base of the third part, the food-gathering arms. The arms, which are also segmented, have grooves with cilia, or tiny hairs, that capture suspended food particles and direct them back towards the mouth. The number of arms varies from five, common in primitive species, to as many as 200 in some living species. The number of arms is always a multiple of five.

Sea lilies are sedentary and are attached to the sea bed by a stalk. Feather stars are mobile and have no stalk.

Crinoids have lived in the world's oceans since at least the beginning of the Ordovician period, roughly 490 million years ago. They may be even older. Some paleontologists think that a fossil called Echmatocrinus, from the famous Burgess Shale fossil site in British Columbia, may be the earliest crinoid. The Burgess Shale fossils date to the middle Cambrian, well over 500 million years ago. Either way, crinoids have had a long and successful history on Earth.

Crinoids flourished during the Paleozoic era, carpeting the seafloor like a dense thicket of strange flowers, swaying with the ocean currents. They peaked during the Mississippian Period, when the shallow, marine environments they preferred were widespread on several continents. Massive limestones in North America and Europe, made up almost entirely of crinoid fragments, attest to the abundance of these creatures during the Mississippian.

Crinoids came close to extinction towards the end of the Permian period, about 250 million years ago. The end of the Permian was marked by the largest mass extinctions in the history of life. The fossil record shows that nearly all the crinoid species died out at this time. The one or two surviving lineages eventually gave rise to the crinoids populating the oceans today.