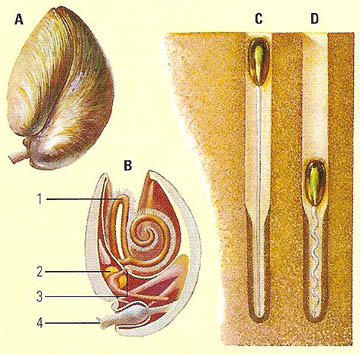 A brachiopod comprises a hinged shell and a stalk with which it grips the rocks. The cross-section (B) shows; lophophore (1) which bears ciliated tentacles used for feeding, digestive gland (2), mouth (3), and stalks (4). When feeding Lingula, (C), which resembles fossil forms of 500 million years ago rests on the surface of its burrow using feathery cilia to filter water for food particles, When disturbed, its stalk contracts, drawing the animal into the burrow (D). 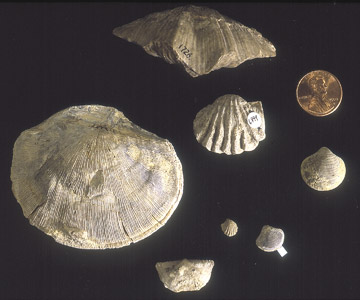 A sample of fossil brachiopods found in Kansas.

A brachiopod is any of several hundred species of small, bottom-dwelling, marine invertebrates of the phylum Brachiopoda. Known commonly as lamp-shells, they are similar in outward appearance to bivalve molluscs, having a shell composed of two valves; however, unlike bivalves, they are bilaterally symmetrical – in other words, the right half is a mirror image of the left half (by contrast many bivalves, such as clams, are symmetrical along the line where the valves meet).

The name brachiopod comes from the Latin brachio (arm) and pod (foot), and refers to a paired, internal structure, which scientists initially thought was used for locomotion. This structure, called the lophophore, is actually used for feeding and respiration and is one of the features common to all brachiopods.

Although some brachiopods survived the end-Permian extinction, and their descendants live in today's oceans, they never achieved their former abundance and diversity. Only about 300 to 500 species of brachiopods exist today, a small fraction of the perhaps 15,000 species (living and extinct) that make up the phylum Brachiopoda.