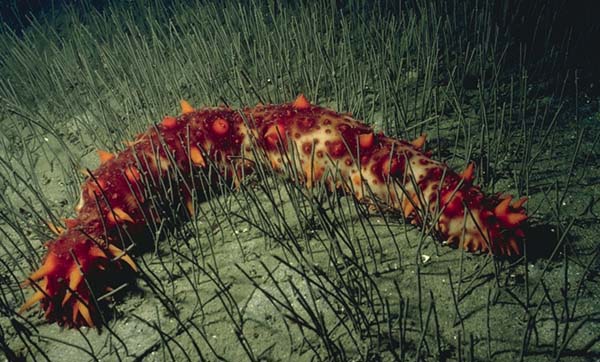 A sea cucumber is a typically sausage-shaped, marine echinoderm (class Holothuroidea) having a mouth at one end surrounded by up to 30 tentacles and an anus at the other end. Sea cucumbers have a leathery skin that contains minute bony structures known as ossicles. Sea cucumbers are an abundant and diverse group found in nearly every marine environment, but are most diverse on tropical, shallow-water coral reefs. They are also found in the deep sea.

Although they don't superficially resemble other members of the phylum Echinodermata, sea cucmbers retain pentameral (five-rayed) symmetry, with five rows of tube feet running from the mouth down along the sides of the body.

Sea cucumbers are economically important in two main ways. They produce chemical compounds that are of interest to pharmaceutical firms, and as a food item in Asia, they form the basis of a multimillion-dollar industry that processes the body wall for sale as beche-de-mer or trepang.