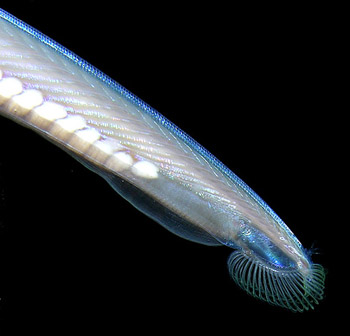 The lancelet (show here is Branchiostoma lanceolatum)) has a fish-like body but a notochord rather than a true backbone.

Cephalochordata is a subphylum of the phylum Chordata (see chordate) containing marine fish-like animals that differ from fish by lacking bone or cartilage, paired fins, jaws, and teeth. In Cephalochordata the notochord persists into adulthood.

Living representatives of cephalochordates are the lancelets (amphioxus), of which about 32 species are known. The lancelets are sand burrowers on the beaches of temperature and tropical seas, also capable of short bursts of free swimming. They are the most fascinating of the protochordates because they have simple bodies bearing all the hallmarks of the chordates. Running nearly the whole distance from head to tail is a notochord below the typically hollow chordate nerve cord. Behind the lancelet mouth on each side of the body lie more than 100 pairs of gill slits. These are used partly for filtering food and partly for extracting oxygen from seawater.

Like all protochordates the adult lancelet does not develop from the egg directly but is the result of metamorphosis fro a larva. These larvae, which live in the plankton, may sometimes develop signs of sexual organs – further evidence that true vertebrates may have evolved from larval forms that became mature without the intervention of metamorphosis.