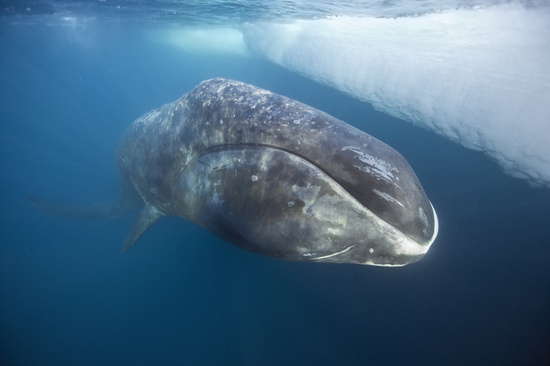 The bowhead whale (Balaena mysticetus) is a cetacean of the suborder Mysticeti, which means it has baleen plates instead of teeth for filtering food out of the ocean. Bowhead whales have extremely long baleen plates (up to 14 feet) and feed almost exclusively on zooplankton, which includes small to moderately sized crustaceans such as copepods, euphausiids, and mysids, as well as other invertebrates and fish. Bowhead whales have a dark body and a distinctive white chin. Unlike most cetaceans, they lack a dorsal fin.

The bowhead whale has a massive bow-shaped skull that is over 16.5 feet (5 meters) long and about 30–40% of their total body length. This large skull allows the bowhead whale to break through thick ice with its head. The bowhead whale also has a 17–19 in (43-50 cm) thick blubber layer, thicker than any other whale's blubber.

Bowhead whales are circumpolar, ranging throughout high latitudes in the Northern Hemisphere. They spend the winter associated with the southern limit of the pack ice and move north as the sea ice breaks up and recedes during spring. Five stocks of bowhead whales have been recognized. Three of these stocks occur in the North Atlantic: the Spitsbergen, Baffin Bay-Davis Straight, and Hudson Bay-Fox Basin stocks; and two in the North Pacific: the Sea of Okhotsk and Bering-Chukchi-Beaufort stocks.

There are thought to be more than 17,000 in existence. The bowhead is a target for indigenous hunters in Alaska, Chukotka and Greenland who are allowed to catch no more than 69 individuals a year under IWC rules.