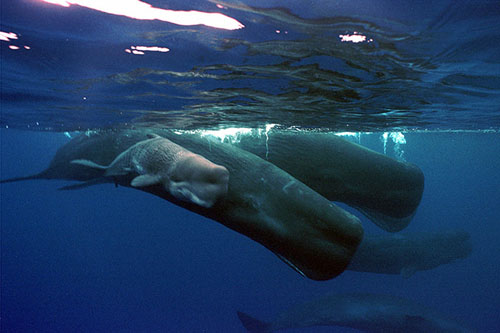 Sperm whales (Physeter macrocephalus) are the largest of the odontocetes (toothed whales) and the most sexually dimorphic cetaceans, with males considerably larger than females. Adult females may grow to lengths of 36 ft (11 m) and weigh 15 tons (13,607 kg). Adult males, however, reach about 52 ft (16 m) and may weigh as much as 45 tons (40,823 kg).

The sperm whale is distinguished by its extremely large head, which takes up to 25 to 35% of its total body length. It is the only living cetacean that has a single blowhole asymmetrically situated on the left side of the head near the tip. Sperm whales have the largest brain of any animal (on average 17 lb (7.8 kg) in mature males), however, compared to their large body size, the brain is not exceptional in size.

There are between 20–26 large conical teeth in each side of the lower jaw. The teeth in the upper jaw rarely erupt and are often considered to be vestigial. It appears that teeth may not be necessary for feeding, since they do not break through the gums until puberty, if at all, and healthy sperm whales have been caught that have no teeth.

Sperm whales are mostly dark gray, but oftentimes the interior of the mouth is bright white, and some whales have white patches on the belly. Their flippers are paddle-shaped and small compared to the size of the body, and their flukes are very triangular in shape. They have small dorsal fins that are low, thick, and usually rounded.

Because sperm whales spend most of their time in deep waters, their diet consists of many larger organisms that also occupy deep waters of the ocean. Their principle prey are large squid weighing between 3.5 oz and 22 lb (0.1 kg and 10 kg), but they will also eat large demersal and mesopelagic sharks, skates, and fishes. The average dive lasts about 35 min and is usually down 1,312 ft (400 m), however dives may last over an hour and reach depths over 3,280 ft (1000 m).

Female sperm whales reach sexual maturity around 9 years of age when they are roughly 29 ft (9 m) long. At this point, growth slows and they produce a calf approximately once every five years. After a 14–16 months gestation period, a single calf about 13 ft (4 m) long is born. Although calves will eat solid food before one year of age, they continue to suckle for several years. Females are physically mature around 30 yr and 35 ft (10.6 m) long, at which time they stop growing. For about the first 10 years of life, males are only slightly larger than females, but males continue to exhibit substantial growth until they are well into their 30s. Males reach physical maturity around 50 years and when they are 52 ft (16 m) long. Unlike females, puberty in males is prolonged, and may last between ages 10 to 20 years old. Even though males are sexually mature at this time, they often do not actively participate in breeding until their late twenties.

Most females will form lasting bonds with other females of their family, and on average 12 females and their young will form a family unit. While females generally stay with the same unit all their lives in and around tropical waters, young males will leave when they are between 4 and 21 yr old and can be found in "bachelor schools", comprising of other males that are about the same age and size. As males get older and larger, they begin to migrate to higher latitudes (toward the poles) and slowly bachelor schools become smaller, until the largest males end up alone. Large, sexually mature males that are in their late 20s or older, will occasionally return to the tropical breeding areas to mate.

Sperm whales tend to inhabit areas with a water depth of 1968 ft (600 m) or more, and are uncommon in waters less than 984 ft (300 m) deep. Female sperm whales are generally found in deep waters (at least 3,280 ft, or 1,000 m) of low latitudes (less than 40°, except in the North Pacific where they are found as high as 50°). These conditions generally correspond to sea surface temperatures greater than 15°C, and while female sperm whales are sometimes seen near oceanic islands, they are typically far from land.

Immature males will stay with female sperm whales in tropical and subtropical waters until they begin to slowly migrate towards the poles, anywhere between ages 4 and 21 years old. Older, larger males are generally found near the edge of pack ice in both hemispheres. On occasion, however, these males will return to the warm water breeding area.

No critical habitat has been designated for this species.

Sperm whales inhabit all oceans of the world. They can be seen close to the edge of pack ice in both hemispheres and are also common along the equator, especially in the Pacific. Sperm whales are found throughout the world's oceans in deep waters between about 60° N and 60° S latitudes. Their distribution is dependent on their food source and suitable conditions for breeding, and varies with the sex and age composition of the group. Sperm whale migrations are not as predictable or well understood as migrations of most baleen whales. In some mid-latitudes, there seems to be a general trend to migrate north and south depending on the seasons (whales move poleward in the summer). However, in tropical and temperate areas, there appears to be no obvious seasonal migration.

During the past two centuries, commercial whalers took about 1,000,000 sperm whales. Despite this high level of "take", the sperm whale remains the most abundant of the large whale species. Currently, there is no good estimate for the total number of sperm whales worldwide. The best estimate, that there are between 200,000 and 1,500,000 sperm whales, is based on extrapolations from only a few areas that have useful estimates.

The greatest natural predators to sperm whales are killer whales, which have been documented killing at least one sperm whale in California. Typically, however, it is believed that most killer whale attacks are unsuccessful. Pilot whales have been observed harassing sperm whales, but it is unclear if they pose any real threat. Large sharks may also be a threat, especially for young sperm whales.

The greatest threat for sperm whales has been man, especially with the advent of whaling. Between 1800 and 1987, whalers took a total of at least 436,000 sperm whales, but the actual takes may be as high as 1,000,000. Hunting of sperm whales by commercial whalers declined in the 1970s and 1980s, and virtually ceased with the implementation of a moratorium against whaling by the IWC in 1988. Sperm whales are still being targeted in a few areas: there is a small catch by primitive methods in Lamalera, Indonesia, and Japan takes sperm whales for scientific purposes. There is also some evidence to suggest that sperm whales are being hunted illegally in some parts of the world.

In addition to whaling, sperm whales may be impacted by other shipping and fishing operations. Sperm whales have the potential to be harmed by ship strikes and entanglements in fishing gear, although these are not as great of a threat to sperm whales as they are to more coastal cetaceans.

Disturbance by anthropogenic noise may prove to be an important habitat issue in some areas of this population's range, notably in areas of oil and gas activities or where shipping activity is high. Another potential human-cased source of mortality is from accumulation of stable pollutants (e.g. polycholorobiphenyls (PCBs), chlorinated pesticides (DDT, DDE, etc.), polycyclic aromatic hydrocarbons (PAHs), and heavy metals). Stable pollutants might affect the health or behavior of sperm whales. The potential impact of coastal pollution may be an issue for this species in portions of its habitat, though little is known on this to date.

The principal cause of the decline in sperm whales was commercial whaling, and prohibitions on their harvest by the IWC have reduced the magnitude of the threat.