The beluga is an Arctic species of whale. It usually travels in a school which may number hundreds. Its food consists of many species of fish and squid. 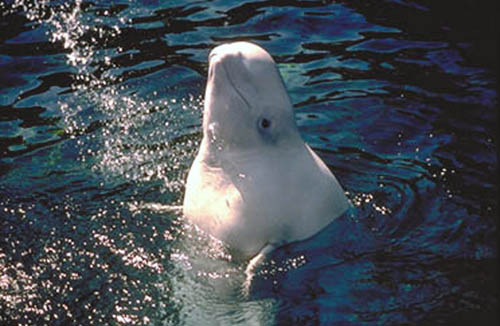 Unlike other cetaceans, belugas can move their head up, down, and side to side, because their cervical vertebrae are not fused. This feature appears to be an adaptation to maneuvering and catching prey in muddy or ice-covered areas.

Beluga whales are covered with a thick layer of blubber that accounts for as much as 40 percent of their body mass. This fat provides thermal protection and stores energy. Belugas are unique among cetaceans in that they shed their outer layer of skin, or molt, each summer around July. They concentrate in shallow water where there is coarse gravel to rub against. The rubbing action helps remove the top layer of old yellow skin and reveal the new skin underneath.

Beluga whales mate in the spring, usually in March or April, in small bays and estuaries. Gestation lasts about 14–15 months, and calves are born between March and September, mostly between May and July. Females give birth to single calves (and on rare occasion twins) every two to three years on average. They give birth where the water is relatively warm (50–60°F or 10–15°C). Beluga calves nurse for at least 12 to 18 months, until their teeth emerge, at which point they supplement their diets with shrimp and small fishes. Most calves continue to nurse for another year after beginning to eat solid food. Female belugas are old enough to reproduce at around 4 to 7 years of age and males around 7 to 9 years. Their lifespan is thought to be about 35–50 years.

Belugas are extremely social animals that typically migrate, hunt, and interact together in groups of 10 to several hundred. They are known as the "canaries of the sea," because they produce a vast repertoire of sounds including whistles, squeals, moos, chirps, and clicks. They have a well-developed sense of hearing and echolocation, and are reported to have acute vision both in and out of water. Belugas are opportunistic feeders, eating octopus, squid, crabs, shrimp, clams, mussels, snails, sandworms, and fishes, including anadromous eulachon and salmon and marine species such as capelin, cod, herring, smelt, flounder, sole, sculpin, lamprey, and lingcod.

Beluga whales are generally found in shallow coastal waters, often in water barely deep enough to cover their bodies, but have also been seen in deep waters. They seem well adapted to both a cold ocean habitat and a warmer freshwater habitat. Belugas can be found swimming among icebergs and ice floes in the waters of the Arctic and subarctic, where water temperatures may be as low as 32°F (0°C). They can also be found in estuaries and river basins.

Beluga whales are circumpolar in distribution. Beluga whales inhabit the Arctic and subarctic regions of Russia, Greenland, and North America. They inhabit the Arctic Ocean and its adjoining seas, including the Sea of Okhotsk, the Bering Sea, the Gulf of Alaska, the Beaufort Sea, Baffin Bay, Hudson Bay, and the Gulf of St. Lawrence. During certain times of the year, belugas may also be found in large rivers, such as the Yukon, as they seem to be unaffected by salinity changes.