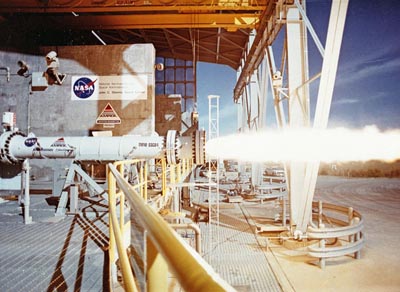 A hybrid-propellant rocket engine is an engine that combines some of the advantages of both liquid- and solid-fueled rocket engines. The basic design of a hybrid consists of a combustion chamber tube, similar to that of ordinary solid-propellant rockets, packed with a solid chemical, usually the fuel. Above this tube is a tank containing a complementary reactive liquid chemical, usually the oxidizer. The two chemicals are hypergolic (self-igniting), and when the liquid chemical is injected into the combustion chamber containing the solid chemical, ignition occurs and thrust is produced. The engine can be throttled by varying the rate of liquid injected, and stopped and started by cutting off the liquid flow and later restarting it.