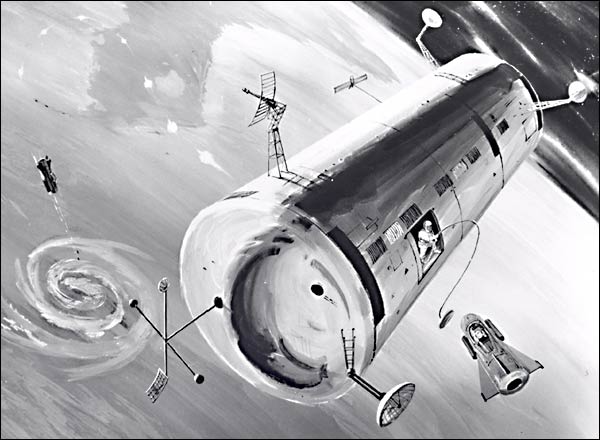 Manned Orbiting Laboratory (MOL) was a United States Air Force, two-man cylindrical space station, about 12.5 m long and 3 m in diameter, which would have been attached to a Gemini spacecraft for 30-day missions in orbit similar to those of the early Salyut space stations. It was intended to develop reconnaissance techniques and carry out other clandestine tasks. Approved by President Johnson in 1965, the MOL project went as far as having a mock-up launched by a Titan IIIC on Nov 3, 1966, but was cancelled in 1969. Much of the technology for MOL is believed to have been transferred to unmanned spy satellites.

The Manned orbiting laboratory was announced by Secretary of defense Robert S. McNamara on Dec 10, 1963, and placed under full development on Aug 25, 1965. In describing MOL to the Senate Committee and Space Sciences, Deputy Secretary of Defense Cyrus R. Vance said:

[it] will likely consist of a pressurized section, an unpressurized equipment section, and an experiments module. The pressurized module should include an operating compartment with about 500 cubic feet [of] volume, and a separate living-working compartment large enough to accommodate needs for 30 days' flight, probably some 500 to 700 feet ... Payload capacity should be as large as possible. Estimates of a meaningful test program have included about 3,000 to 5,000 pounds of discretionary test equipment ... [The personnel module] will operate in a quiescent mode for the on-orbit duration, and then have the ability to loiter, manned, for about 12 hours, re-enter safely for water recovery ...

The Douglas Aircraft Company was chosen prime contractor. Total cost of the program was estimated at $1.5 billion.