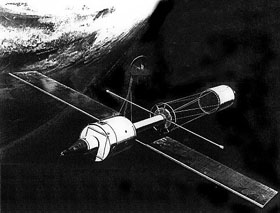 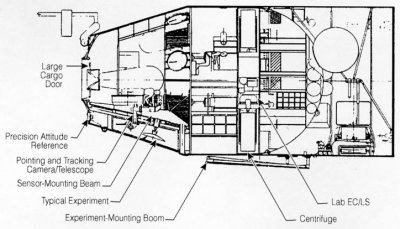 The MORL (Manned Orbiting Research Laboratory) was a 1960s NASA Langley concept for a small cylindrical space station, which would have a crew of six be powered by solar panels. The design, developed extensively by Douglas Aircraft, called for a crew quarters area, laboratory area, and a hangar for receiving space freighters to transfer supplies.

Rather than seeking to support large crews in the comfort of artificial gravity, as early designs by von Braun and others had done, MORL emphasized small crews that would live in weightlessness in versatile, compact stations. The basic station was to fly atop a Saturn I-B and hence had that rocket's diameter of 22 ft (6.6 m). Weighing 30,000 lb at launch, MORL would enclose 9000 ft3 of internal volume, with a crew of six. Each astronaut would serve a six-month tour of duty. A modified Apollo spacecraft, riding its own Saturn I-B, would carry supplies along with new three crew members to the space station.

Specialized equipment would enhance the usefulness of MORL. It would carry astronomical telescopes. A crew-tended radar would support large-scale topographical mapping. Douglas Aircraft also proposed to install a nine-lens camera system for observation of the earth's surface and weather at a variety of wavelengths. With astronauts tending a lab full of plants, animals and bacteria, additional modules would research new fields such as life sciences. The addition of other such modules would allow the basic station to expand to house nine astronauts rather than the original six. Selected crew members would remain in orbit for as long as a year.

Use of the Saturn V would enable the MORL to fly in orbits as high as 23,000 mi while continuing to receive resupply. The MORL would be able to fly to lunar orbit to map the moon's surface. It would be able to land on the Moon and to serve as a base. Serving as a test bed for systems intended for use in a piloted mission to Mars, MORL also might evolve into an important element of a spacecraft built to carry out such a mission.