Space Station V from the film 2001: A Space Odyssey. 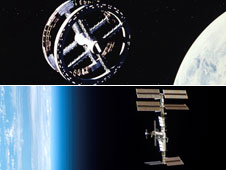 Space Station V is the partially-built space station depicted in the film 2001: A Space Odyssey, directed by Stanley Kubrick in 1968. The spinning, double-wheel structure is based on a space station concept developed by Wernher von Braun.

Kubrick's station in the movie is 560 m (1,836 ft) in diameter, revolves to produce one-sixth Earth surface gravity, orbits 320 km (200 mi) above the Earth, and is home to an international contingent of scientists, passengers, and bureaucrats. The center of the station serves as a docking port for various space shuttles while the one completed outer ring houses living quarters, recreation and shopping areas, and meeting facilities.

When 2001: A Space Odyssey premiered four decades ago, living and working in space full time was science fiction. Today, several crew members are resident aboard the International Space Station 365 days a year operating one of the most complex engineering projects in history. The station is helping us push the boundaries of 21st century science, technology and engineering.

The model of Space Station V using in the film was about 7 ft across. It was found a few years after 2001 was made, discarded in an English field with grass and weeds growing over its decaying surface.