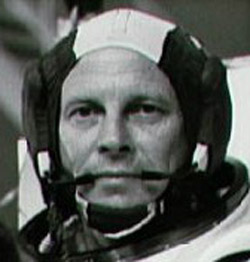 Jack Lousma is a retired American astronaut who served as pilot for Skylab 3 and backup docking module pilot of the American flight crew for the Apollo-Soyuz Test Project. On his second space mission Lousma was commander of the third orbital test flight of Space Shuttle Columbia (STS-3) launched on March 22, 1982. He received a BS in aeronautical engineering from the University of Michigan in 1959, the year in which he also joined the Marine Corps, and earned a MS in aeronautical engineering from the United States Naval Postgraduate School in 1965. Lousma left NASA in 1983 and later became chairman of AeroSport, Inc., Ann Arbor, Michigan.