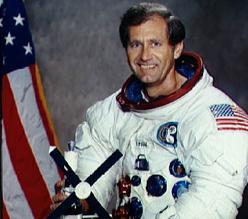 William Pogue was an American astronaut who flew aboard Skylab and served on the support crews for the Apollo 7, 11, and 14 missions. His Air Force military career included a combat tour during the Korean conflict, two years as an aerobatic pilot with the Air Force's precision flying team, the Thunderbirds, and an exchange assignment with the Royal Air Force as a test pilot. In addition, he served as an assistant professor of mathematics at the United States Air Force Academy in Colorado Springs. In April 1966, Pogue was selected in the fifth group of NASA astronauts. Together with Gerald Carr and Edward Gibson he flew on Skylab 4, the third and final manned visit to the orbiting laboratory, setting, along with Carr, a new record for the longest space walk of seven hours. In 1977, Pogue left NASA to pursue a new career as consultant to aerospace and energy companies. He worked with the Boeing Company in support of the Space Station Freedom Project, and later worked with them on the International Space Station Project, specializing in assembly extravehicular activity.