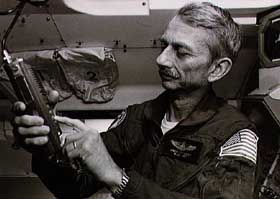 Owen Garriott is a retired American astronaut and scientist who flew aboard Skylab 3 in 1973 and the Space Shuttle Columbia a decade later. Garriott received a BS in electrical engineering from the University of Oklahoma (1953) and a MS (1957) and PhD (1960) in electrical engineering from Stanford University. Following graduation from Oklahoma, he served as an electronics officer aboard several destroyers while on active duty with the United States Navy (1953–56). From 1961 to 1965, he taught electronics and ionospheric physics as an associate professor at Stanford, before being selected by NASA among the first group of scientist-astronauts. Aboard Skylab, Garriott made extensive observations of the Sun during a period of intense solar activity. In November 1983, he returned to orbit aboard Columbia and helped conduct medical, astronomy, Earth survey, atmospheric, and materials processing experiments on the first Spacelab mission. Subsequently, Garriott was appointed assistant director for space science at Johnson Space Center before leaving NASA. He is currently vice president of Space Programs at Teledyne Brown Engineering.