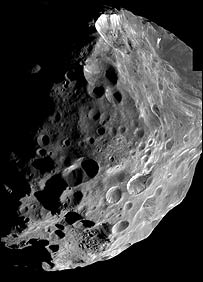 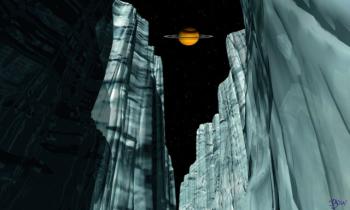 Phoebe is one of the outer moons of Saturn; it is also known as Saturn IX. Phoebe rotates once every 9 hours or so during each orbit of 550 days so that unlike Saturn's other moons (with the exception of Hyperion) it doesn't always show the same face toward the planet. It is dark, quite red, resembles in appearance the common class of carbonaceous asteroids, and is almost certainly a captured asteroid. According to one idea, the dark material on the leading hemisphere of Iapetus may have originated on Hyperion and been dislodged by micrometeorite impacts. Phoebe is probably the source of the material contained in the enormous infrared-emitting discovered around Saturn in 2009 and within which Phoebe orbits.

When it was discovered in 1898, Phoebe was Saturn's outermost known moon. That changed with the discovery of several smaller moons in 2000. Phoebe is almost four times farther from Saturn than its nearest major neighbor, Iapetus, and substantially larger than any of the other moons orbiting at comparable distances. With a diameter of 220 km (140 mi), it rotates on its axis every 9 h 16 min and completes a full orbit around Saturn in about 18 months. All of Saturn's moons except for Phoebe and Iapetus orbit very nearly in the plane of Saturn's equator. Phoebe's orbit is highly eccentric and retrograde: it orbits backwards with respect to the direction of the other moons.

Based on data from the Voyager flyby, Phoebe resembles a sort of dark asteroid. It may be very primitive. All previous indications suggest that it may be a captured Kuiper Belt object, one of the millions of asteroid-like bodies from outside the orbit of Pluto. If this is the case, the images of it sent back by Cassini in 2004 represent the most detailed close-ups of any such object ever taken.