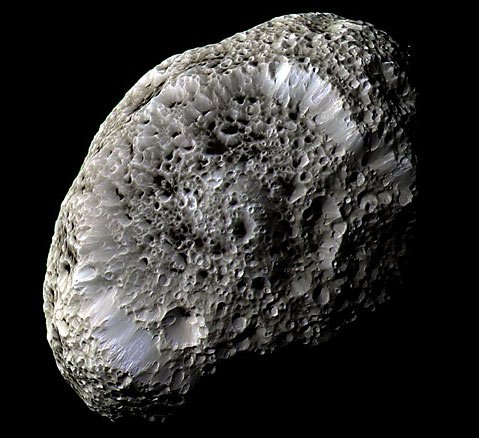 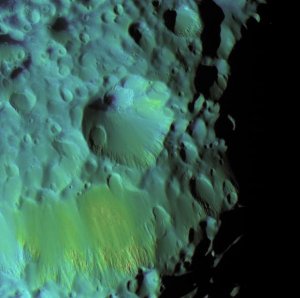 Hyperion is a moon of Saturn that rotates chaotically and has a bizarre sponge-like appearance. Hyperion is the largest irregular satellite in the Solar System (Neptune's Proteus is larger but almost spherical), measuring 360 × 280 × 225 km. It was discovered by William and George Bond and, independently, by William Lassell, in 1848, and is also known as Saturn VII.

Hyperion moves at a mean distance of 1.48 million km from Saturn and is strongly influenced by nearby Titan. Its rotation is chaotic, its axis of rotation wobbling so much that its orientation in space is totally unpredictable. Hyperion is the only known body in the Solar System that rotates chaotically, though simulations indicate that other irregular satellites may have behaved this way in the past. Hyperion is unique in combining an irregular shape, a highly eccentric orbit, and a proximity to another large moon. These factors conspire to make rotational instability more likely. The 3:4 orbital resonance between Titan and Hyperion also appears to increase the odds of chaotic rotation. Hyperion's strange spin probably accounts for the fact that Hyperion's surface is more or less uniform, in contrast to many of Saturn's other moons which have distinctly different leading and trailing hemispheres.

New details about this oddball moon came to light in September 2005, when the Cassini spacecraft approached Hyperion to within a distance of 990 km (615 mi). The surface is speckled with impact craters which have been modified by some process, not yet understood, to create a strange spongy appearance. Much of the interior of Hyperion is empty space, suggesting it is little more than a pile of space rubble. Researchers are also keen to learn the nature of dark material that seems to cover the floor of some craters.