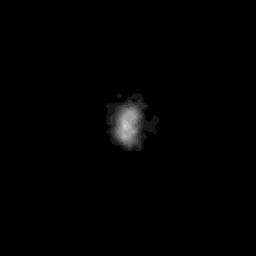 Voyager 2 view of Nereid obtained on 24 August 1989 at a distance of 4.7 million km (2.9 million miles). With a resolution of 43 km (26.6 miles) per pixel, this image has sufficient detail to show the overall size and albedo.

Nereid is the outermost moon of Neptune. It was discovered on 1 May 1949 by Gerard P. Kuiper. It is named after the Nereids, the 50 sea-nymph daughters of Nereus, a Greek sea god and is also known as Neptune II. Nereid has the most eccentric orbit of any satellite in the Solar System, taking it from about 1,353,600 km to 9,623,700 km from Neptune. This unusual orbit suggests that Nereid may be a captured asteroid or Kuiper Belt object, or possibly that it was perturbed during the capture of Neptune's largest moon Triton. Nereid's surface is somewhat more reflective than that of our own Moon and about twice as reflective as that of the six inner moons of Neptune.