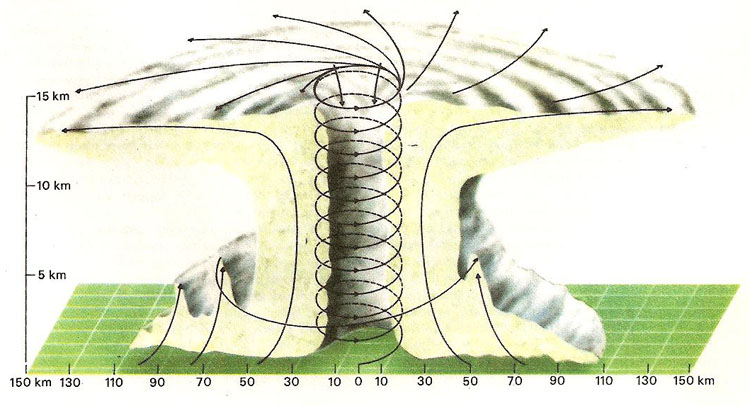 >A section through a hurricane. Air violently spirals around a calm "eye", strong updrafts giving rise to heavy rain.

A hurricane is a tropical cyclone, usually of great intensity, measuring force 12 or greater on the Beaufort wind scale. In a hurricane, high-speed winds spiral in toward a low-pressure core of warm, calm air (the eye); the minimum wind speed is about 118 km/h (73 mph), although winds of over 300 km/h have been measured. The direction of spiral is clockwise in the Southern Hemisphere, counterclockwise in the North (see Coriolis effect).

Hurricanes form (usually between latitudes 5° and 25°) when there is an existing convergence of air near sea level toward a center. The air ascends, losing moisture as precipitation as it does so. If this happens rapidly enough, the upper air is warmed by the water's latent heat of vaporization. This reduces the surface pressure, so accelerating air convergence. Hurricanes have a calm central eye, surrounded by inward spiraling winds and cumulonimbus clouds. The winds and waves of hurricanes take many lives and cause extensive damage to shipping and coastal areas, but weather satellites often give adequate warning of their approach.

Hurricanes of the North Pacific are often called typhoons.